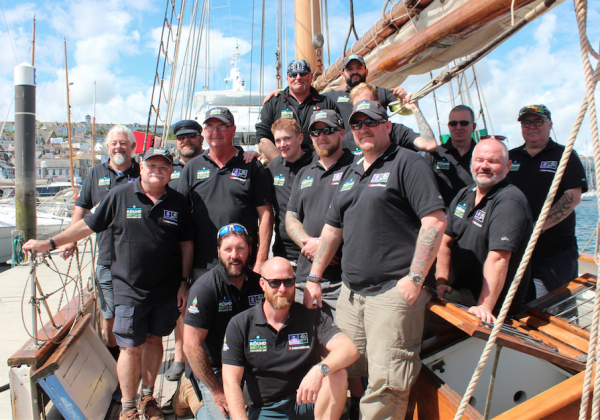 Crew members on the Turn to Starboard Round Britain Challenge 2017

Seventeen crew members – many with little or no sailing experience – set sail from Falmouth in Cornwall on August 5 on the Turn to Starboard Round Britain Challenge 2017.

The intrepid crew are circumnavigating the British Isles in a clockwise direction on board a tall ship, to help participants gain new skills and highlight the challenges veterans can face after leaving the military.

After experiencing heavy storms, damaged sails and 40 knot winds the 92-foot tall ship reached the half-way point at Stromness in the Orkney Isles on Thursday (August 31).

Expedition leader and former Royal Marine Dan Fielding said: “We are absolutely delighted that all of the team safely reached Stromness at Orkney. The team has overcome huge waves and stormy weather to reach the island and our success means that we are now halfway to achieving our ultimate goal. After a few hours of rest, we will be looking forward to our next leg to Newcastle for a series of shoreside engagements over a four-day period.”

Some of the team, which is comprised of military veterans suffering with physical injuries or mental trauma, will gain new skills during the 8-week journey to help start new careers in the marine industry. Others have set themselves a personal challenge as they battle with their own issues after Service life.

The epic expedition has been organised by Turn to Starboard, a Cornish charity that helps military personnel affected by military operations by providing sailing courses. Lead supporter of the initiative is The Endeavour Fund, which plays an important role in ensuring that more servicemen and women have the opportunity to rediscover their self-belief and fighting spirit through physical challenges.

Stuart Croxford, Programme Manager at The Endeavour Fund commented: “Turn to Starboard does a fantastic job in supporting wounded, injured and sick Servicemen and women on their journey to recovery and helping them rediscover their fighting spirit. This Round Britain Challenge will not only be a once-in-a-lifetime experience but it will give all participants the chance to gain new skills and qualifications which will help them long after they return.”

Photo: Crew members on the Turn to Starboard Round Britain Challenge 2017