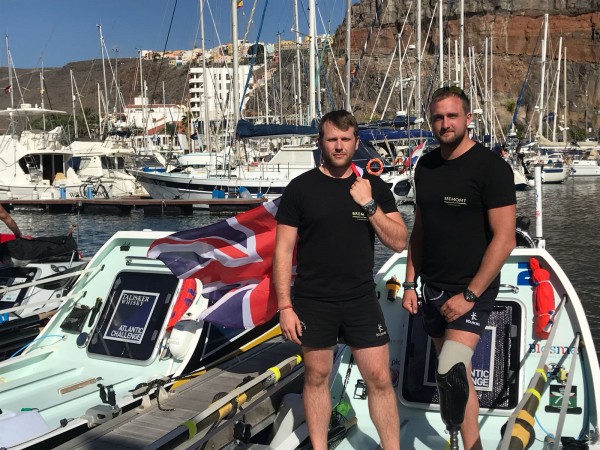 Jordan Beecher and Captain Jon Armstrong are making their final preparations on the Canary Island of La Gomera for what will be an epic row of around 3,000 miles across the Atlantic Ocean that starts tomorrow (12th December).

Jon is a serving officer with the Royal Gurkha Rifles, and Blesma Member Jordan was a Corporal in the Parachute Regiment before being injured in Afghanistan in 2012. He stepped on an IED which resulted in him losing his left leg below the knee. The pair have been friends for years having served in Afghanistan together.

In 2015, Jon completed a 1,000-mile Arctic Expedition while Jordan won multiple gold medals in rowing at the inaugural Invictus Games in London in 2014. They were looking for their next challenge when Jon suggested the Atlantic Challenge, dubbed ‘the world’s toughest row’.

‘Team Trident’ as they are known, have chosen to raise money for three charities: Blesma, The Limbless Veterans, children’s charity Dreamflight, and The Royal Gurkha Rifles Trust. So far they have raised almost £3,500.

Jon and Jordan will live in a seven meter boat containing everything they need to survive, the pair will row in continuous two-hour shifts around the clock for between 40 and 60 days. If the row wasn’t enough, Jon and Jordan can expect up to 50 knot winds, waves the size of houses, 40 degree heat, sleep deprivation, hallucinations, sea sickness, mental and physical fatigue and will survive off military ration packs for the entire journey!

In the lead up to the row, Jon said: “As the date of the race fast approaches the nerves are starting to set in. The truth is that nothing can really prepare you for a 3,000-mile ocean row and success depends on good kit and good preparation. We have been training hard and hopefully that will put us in good stead. Jordan and I are looking forward to the challenges ahead and we know that we will be able to overcome whatever challenges may come our way due to the fact that we know we can rely on each other.”

Speaking at the Team’s fundraising event in November at the Royal Military Academy Sandhurst, Chief Executive of Blesma, Barry Le Grys, said: “We are very pleased to launch Jon and Jordan on their endeavour. We will always support our Members whether it is rowing the Atlantic or regaining the mobility to go out into the garden to play with their children.”

To support Jon and Jordan in this epic challenge, go to https://uk.virginmoneygiving.com/Team/row2recovery.

Their progress can be followed at the Atlantic Challenge website: https://www.taliskerwhiskyatlanticchallenge.com/