As arduous challenges for SSAFA, the Armed Forces charity go, climbing a mountain ranks quite near the top. Taking on a Three Peaks Challenge is a step beyond that. So how do you top – literally – these? 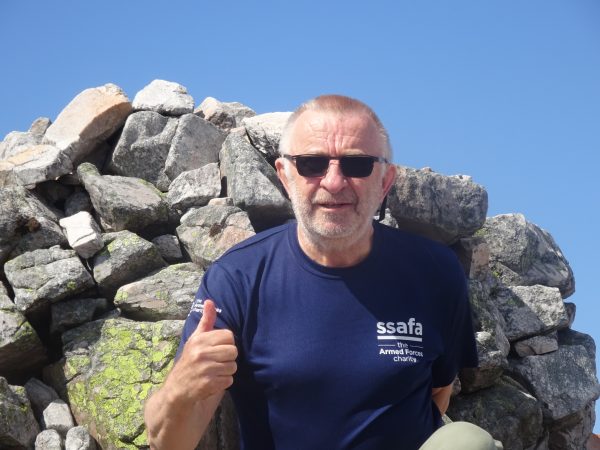 Simple: you bag each one of Scotland’s 282 Munros.

A Munro, for those not in the know, is defined as a Scottish mountain over 3,000 feet (914.4 metres) in height, and which are on the Scottish Mountaineering Club official list of Munros.

Robin Moriarty, 67, a retired HGV driver, his mission is to climb each Munro for SSAFA, though not, understandably, all within one year, but over several and only during the non-Winter months. He began his Munro bagging in 2021 scaling 23 that year and estimates he will have completed his self-set challenge by 2028.

A resident of Rowlands Castle in Hampshire, the highest point near him is Butser Hill on the South Downs, and while at 889ft it qualifies as a Marilyn*, Robin has had to put in a lot of training to get himself up to match speed for the Munros.

It has not, however, all been plain sailing for Robin, and he takes up the story, saying:

“My first session of 2022 was cut short due to a stumble and bruised tendons in my right knee, but I managed to bag four Munros [An Socach (Deeside), Mount Keen, Glas Tulaichean, and Carn an Righ] during that first week, adding another £100 towards my base target of £5,000 for SSAFA.”

Happily, Robin reports that with a little more rest to let his injuries heal, he should soon be travelling north again to continue his monumental Munro mission.

While donations for Robin have come from as far afield as the US, he has had support closer to home including the Parthian Climbing Centre in Southampton, and Mick Cooke of EB Climbing. Respectively, they have given him the space and the expertise to hone his skills to reach each summit.

“Slowly, surely, and safely” is Robin’s mantra for his Munro expedition, and to help him help SSAFA provide the support for veterans and serving personnel, and their families, when, where, and how they need it, visit justgiving.com/fundraising/robin-moriarty.