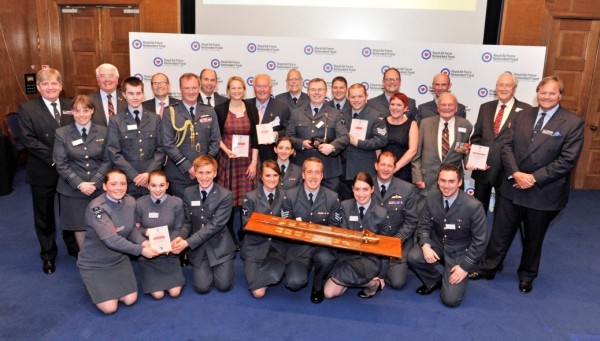 Last night the RAF Benevolent Fund held its annual Awards ceremony at the Royal College of Surgeons in London to celebrate and honour its supporters, donors and volunteers for their remarkable contributions.

This is the fifth year that the Fund – the RAF’s leading welfare charity – has recognised the outstanding efforts made by dedicated individuals, stations, and corporate partners who support the charity each year.  The recipients ranged from a team of six RAF personnel who cycled from RAF Digby to Edinburgh Castle and back, through to a band of Bomber Command Air Crew veterans who have raised more than £100,000 for the Bomber Command Memorial and the RAF Benevolent Fund combined. All those nominated have demonstrated tremendous commitment to helping the RAF Benevolent Fund in its mission of supporting members of the RAF family in their time of need.

Air Vice-Marshal David Murray, Controller of the RAF Benevolent Fund, said: “Every year the RAF Benevolent Fund holds its annual Awards ceremony to honour our terrific supporters. This is really our chance to say thank you to all that help and fundraise for us, they are instrumental to the charity and enable us to continue the work we do of supporting the RAF family when in need. It was difficult to select just ten recipients as we are truly indebted to all of our amazing supporters.”

For more information including images please contact: Brooke Harrison-Davies at brooke.harrison-davies@rafbf.org.uk or 020 7307 3351.