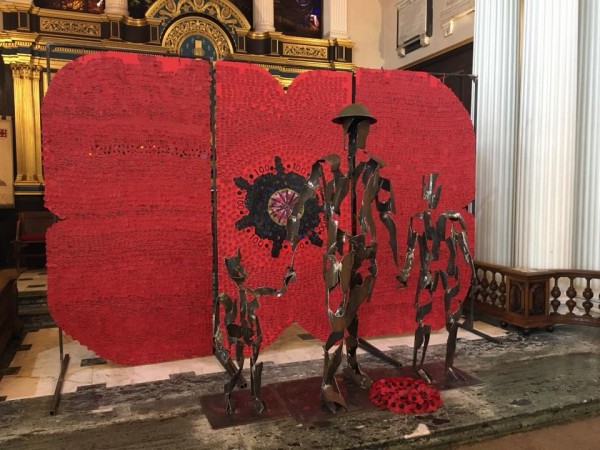 The Churchwardens of St Chad’s Church, Shrewsbury welcomed the public to witness the unveiling of Shropshire’s sculpture to remember all from the county who gave their lives in the Great War.

The Shropshire Poppy Appeal and St Chad’s Church have been working with two local artists, Lyn Evans and Nik Burns along with Martin Phillips of Heritage Schools, to commemorate this special year. 81 Primary schools in Shropshire, and Telford & Wrekin have helped to create a one off sculpture which will stand as a lasting legacy to the 5,286 lives lost from Shropshire during the First World War.

The names were gathered in the Shropshire Roll of Honour, which was compiled by two local amateur military historians, Neil Evans and Phil Morris, and funded by public and trust donations. Every man and woman listed in this Roll of Honour will be remembered in a service in the week of the 100th anniversary of their death ensuring that every individual is valued and their sacrifice honoured, last night being no exception and 30 names were read out along with 38 from the Kings Shropshire Light Infantry who were killed on the 6th June at the Battle of Bligny.

Torn paper artist Lyn Evans and metal work artist Nik Burns were tasked with finding a way to mark the Centenary in a way which reflects Shropshire, which is why primary schools in the County were called upon to write the names of the fallen from their parish war memorials. They wanted to make the next generation truly part of this project and connect them to their past and Shropshire’s history.

After the service, Shropshire Community Fundraiser for the Legion, Jenny Robey, spoke to thank all those who had been involved in this two year project, she said “This year The Royal British Legion is asking everyone to find their own way to say ‘Thank You’ to the generation who lived through the First World War; to those who served, sacrificed and changed our world. We hope, as this sculpture travels across the county during the next 12 months, that it does just that. That people remember all year round those who were lost, but also those who returned, remained and formed our communities in Shropshire.”

The sculpture was unveiled officially by the Deputy Lieutenant Major General John Crackett who attended to represent Sir Algernon Heber-Percy.  To end the evening, local singer Sadie-Beth Holder performed a live version of Walk The Extra Mile, which is an original song, and explains the importance of Remembrance.

The sculpture is free to view, and will be located at St Chad’s Church until August, after which it will be on tour throughout the county before finishing back at St Chad’s in June 2019 to mark the signing of the Armistice.