You are here: Home / News / News / The Royal British Legion Lead Groundbreaking Expedition to the Himalayas

The Royal British Legion Lead Groundbreaking Expedition to the Himalayas

A team of thirteen serving military wounded, injured and sick (WIS) personnel and veterans are preparing for a life-changing expedition in the Himalayas which will form part of their psychological and physical recovery.

The expedition is being led by The Royal British Legion’s Battle Back Centre and Leeds Beckett University who will lead the team on a month long trip through the Himalayas. The expedition will culminate in the summit of Mera Peak on 11 November – which this year marks both Armistice Day and Remembrance Sunday, where they will raise a Legion flag coinciding with the centenary of the end of the First World War.

Many of those selected for the expedition have received support from the Legion’s Battle Back Centre, a leading centre for the recovery and physical and mental wellbeing of both serving WIS and veterans.

The Centre provides tailored programmes which use sport and adventurous activities to help with both physical and psychological challenges. More than 5,000 individuals have been helped by The Battle Back Centre since it opened in 2012.

None of the individuals have any previous experience of high altitude mountaineering, but have been put through their paces on regular training sessions throughout the year in the Cairngorms, the Lake District and Snowdonia. During the training, the team have been led by expert mountain leaders on a programme of graduated training, preparing them for the 6,500 metre Mera Peak.

Ben Shephard, expedition ambassador and TV presenter said: “It’s been fantastic to meet the Mission Himalaya team before they all head out to Nepal. Having climbed Kilimanjaro myself, I have the upmost respect for what they’re about to undertake, especially considering the mental and physical barriers many of them are facing.

“The sacrifices our Armed Forces community make on our behalf are phenomenal, and so it’s great to see The Royal British Legion supporting their ongoing recovery in such a fantastic way. I wish the team all the best for the expedition and will be following their journey with anticipation.”

Chris Joynson, Operations Manager at the Battle Back Centre, and expedition leader for The Royal British Legion says: “We’re thrilled to be leading this expedition, which will no doubt be a huge learning experience for everyone involved as we work to overcome physical and mental challenges.

“The needs of those we serve at the Legion are both changing and complex. The Battle Back Centre is proud to be able to adapt, and introduce fresh approaches to meet the needs of both serving and veterans’ communities, especially around mental health issues which many of our team members are dealing with.” 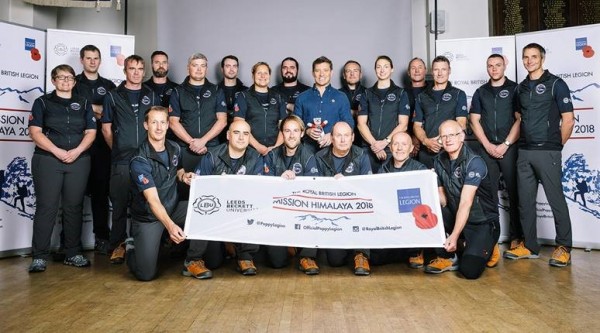 Army veteran Becky Eckersley, is one of the thirteen individuals taking part in Mission Himalaya. Becky served in the Army Royal Logistics Corps for 19 years before having problems with her mental health last year.

Becky signed up for the expedition after seeing a post on the Battle Back Centre Facebook page. She says: “Since my break down last year I’ve been doing a lot of soul searching, and a big part of that is trying to get out and meet new people.

“This whole process has been about the journey for me. I’ve come so far already and to make it on the team heading to the Himalayas is just amazing. Some of the people I’ve met through this I know will be friends for life and I can’t wait to get to Nepal and soak it all up. It will be a huge challenge for me, but one I know I need to do.”

Dave Bunting, Outdoor Development Manager for Carnegie Great Outdoors, is the Expedition Leader. He said: “It’s a great honour to be leading this expedition on behalf of Leeds Beckett University. Having worked at the Battle Back Centre, I have seen first-hand the challenges facing some of the wounded, injured, sick and veteran military and how they can be overcome working together and supporting each other. Leading some of these brave men and women to the summit of Mera Peak will be an amazing achievement for all involved. It will also be an extremely poignant moment with us aiming to reach the summit on Armistice Day and Remembrance Sunday.”

The Mission Himalaya team will depart for Kathmandu on Friday 26th October. To follow their journey visit www.britishlegion.org.uk.

The Royal British Legion’s work is encapsulated in its motto: Live On – to the memory of the fallen and the future of the living. The Legion is the nation’s biggest Armed Forces charity providing care and support to all members of the British Armed Forces past and present and their families. The Legion champions Remembrance and safeguards the Military Covenant between the nation and its Armed Forces. It is well known for the annual Poppy Appeal, and its emblem the red poppy. www.britishlegion.org.uk.