You are here: Home / News / News / The Royal British Legion welcomes funding to ensure veterans get full value of their war pensions in Wales 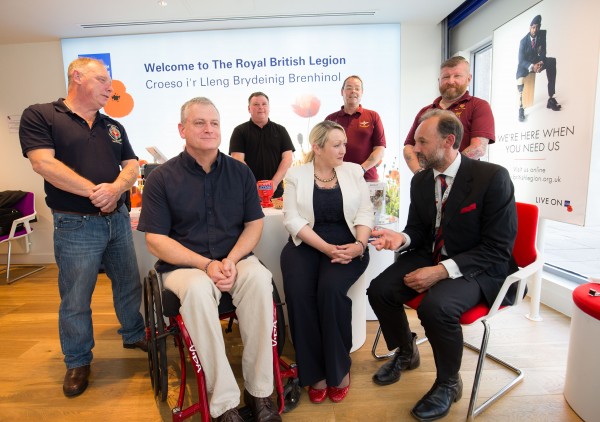 Veterans who receive social care in Wales will now get the full value of their war disablement pensions thanks to a new £300,000 allocation by the Welsh Government.  This follows a campaign by The Royal British Legion, which highlighted a discrepancy that saw certain awards to veterans injured in service reduced to cover some of their social care costs.

The move will potentially benefit over 6,000 veterans in Wales who will now receive the full value of their war disablement pension if they require social care, an average of £87.85 per week. The new money will be provided to local authorities to ensure all veterans receiving social care at home or in a residential home will now keep the full value of their war disablement pensions as these will now be exempt from financial assessment.

Welsh Government Minister for Social Services and Public Health, Rebecca Evans, who announced the funding, today [Monday 8 May] met veterans at The Royal British Legion’s pop-in centre in High Street Cardiff. Speaking ahead of the event, she said:

“We owe our armed forces veterans a significant debt of gratitude, which is why they deserve a fairer deal when it comes to social care.

“Pensions are an important source of compensation for many veterans and ensuring they receive the full amount they are rightfully entitled to will make their life that little bit easier.”

“We welcome the move that means this form of military compensation will no longer be taken to cover injured veterans’ social care costs following our Insult to Injury campaign launched in February 2015.  We are grateful to the Welsh Government which has addressed this historic discrepancy to ensure our Armed Forces community receive the support they deserve. We are extremely grateful to our supporters who helped us raise awareness of our Insult to Injury campaign.”