Following another sell-out year, The Royal Edinburgh Military Tattoo has pledged £193,250 to support the work of the Royal Air Force Benevolent Fund in Scotland. The donation brings the total given to the Fund to more than £1million. 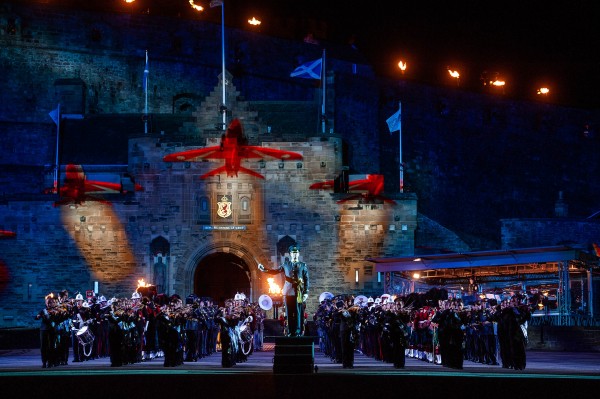 Baz Dale, RAF Benevolent Fund Director Scotland and Northern Ireland, said: “This fabulous donation will allow the Fund to provide vital welfare support to those serving RAF personnel, veterans, and their families in their hour of need.

“We are proud to have stood side by side with the RAF for almost 100 years, ensuring that those who serve, and those who have served, never have to face adversity alone. Just as The Royal Edinburgh Military Tattoo is part of the heartbeat of Scotland, so the RAF Benevolent Fund is the heart of the RAF family and, together, we can continue to make a real difference over the next 100 years.”

The grant will be spent on three main areas, to support the entire RAF Family, from the youngest child growing up on an RAF station, to the oldest veteran who needs support to live independently, in dignity and comfort.

The Fund’s Wellbeing and Employment Programme, which works with veterans living in the Fund’s Housing Trust properties who are wounded, injured or sick, will receive £25,000. A total of £35,000 will be allocated to the Fund’s Ben Play and Ben Parenting schemes, supporting families and young children of serving RAF personnel. From the remainder, £75,000 will be used to fund ‘individual grants’ awarded to members of the RAF Family, past and present, on a case-by-case basis and the rest with go towards the Fund’s general benevolence work and operations.

Rucelle Soutar, Chief Operating Officer, from The Royal Edinburgh Military Tattoo, said: “We are delighted to once again be able to support the Royal Air Force Benevolent Fund, following an incredibly successful Tattoo in 2018, where the RAF were our lead Service. We see the Armed Forces as an integral part of The Royal Edinburgh Military Tattoo, so it is our pleasure to help this great organisation support all generations of the RAF Family in need.”

Air Officer Scotland, Air Vice-Marshal Ross Paterson, said: “I am again thrilled and delighted to see the support of The Royal Edinburgh Military Tattoo towards our RAF Family and those in need. The extraordinarily generous donation to the RAF Benevolent Fund, following the 2018 show, will make a huge difference to the lives of so many of our people, of all ages, and I am so grateful for their kind support.”