You are here: Home / News / News / Royal Navy personnel and veterans join forces to mark 100 years of the Women’s Royal Naval Service (WRNS) and appeal for 2,500 Wrens to access support 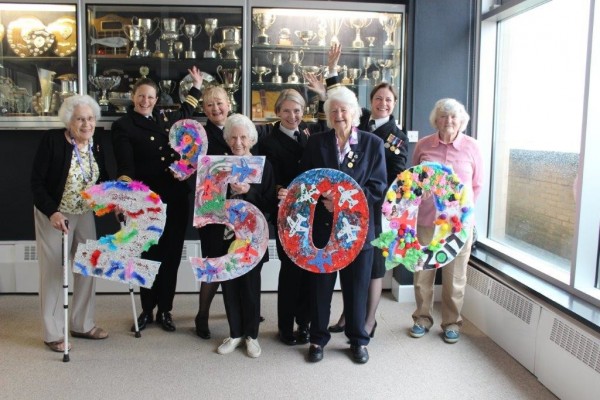 They were joined by women currently serving in the Royal Navy to celebrate the 100th anniversary of the Wrens.

During the formal lunch Blind Veterans UK released research which shows that there could be as many as 2500 blind Wrens eligible for the charity’s free support who are not currently receiving it.

Nine vision-impaired veterans are taking part in the week of activities, including three who are former Wrens. One of these Wrens is 92-year-old Lorna Cockayne.

Lorna, from Dorset, was one of the 600 Wrens who served as a codebreaker at Bletchley Park during the Second World War. 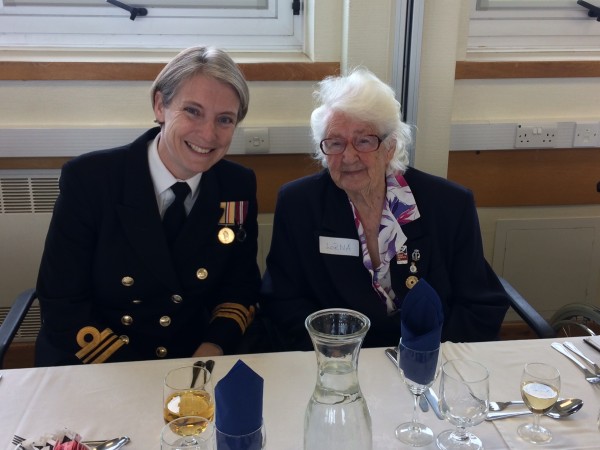 She lost her sight to macular degeneration and has been receiving our free support since 2016. Lorna has visited the Brighton centre before, where she was introduced to the full range of support Blind Veterans UK offers.

Lorna says: “Blind Veterans UK has given me my independence again. They’ve given me so much help and equipment. It’s brilliant. I’ve really enjoyed Women’s Military Week and having the chance to meet the Wrens and other veterans, including one from the ATS who worked at Bletchley Park same as me!”

As well as the lunch, the veterans have enjoyed a range of activities this week, including arts and crafts. They were joined by star of Community Channel’s Crafty Beggars, Nigel May.

Nigel helped the ladies decorate the foam figures shaped into the number 2,500, shown in picture, to signify the ‘missing’ Wrens who may be struggling with sight loss, and who their fellow Wrens are encouraging to come forward for support.

Blind Veterans UK has existed for over 100 years, helping all veterans no matter when they served or how they lost their sight. The charity provides free training, rehabilitation and emotional support so veterans have the skills to live independently, as well as the opportunity to take part in social activities, holidays and respite weeks. It currently supports more than 120 blind Wrens, and is keen to reach out to others.

Commander Ally Pollard, who is currently serving in the Royal Navy, said: “We were delighted to join in the special event at Blind Veterans UK’s Brighton centre to celebrate 100 years of the WRNS and all women who have served in the Armed Forces.

“It was incredible to hear stories from the Wrens about the difference Blind Veterans UK has made, helping them to enjoy a life beyond sight loss. We would encourage all vision-impaired Wrens, and other veterans, to get in touch and find out how they can help”

Blind Veterans UK Brighton centre manager, Lesley Garven said: “We were delighted to welcome serving members of the Royal Navy, Cadets and a range of ex-Armed Forces personnel. We hope that in bringing them together, we have honoured everything that women in the military have achieved over the last 100 years, and also reassured them that we are here for all vision-impaired veterans, no matter when they served or how they lost their sight.”

Blind Veterans UK is the national charity for blind and vision-impaired ex-Service men and women, providing vital practical and emotional support to help veterans discover life beyond sight loss. The charity recently set itself an ambitious target of doubling the number of beneficiaries to 8,000 by 2022. This April, the charity launched new community support teams to provide increased tailored services closer to home with a view to support the charity’s aging beneficiaries.

If you, or someone you know, served in the Armed Forces or did National Service and is now battling severe sight loss, find out how Blind Veterans UK could help by calling 0800 389 7979 or visiting noonealone.org.uk.

Figures are from Blind Veterans UK’s Survey of the vision impaired ex-Service population, 2015-40. Blind Veterans UK estimates the number of WRENS living with severe sight loss in the UK to be around 2,500. This is based on available intake figures from the Ministry of Defence from 1939 to 1993, of which an average 23% served in the WRNS. RNIB blindness prevalence rates on the number of women in the UK with severe sight loss are then applied to reach an estimated figure.

Blind Veterans UK (formerly St Dunstan’s) is a national charity that believes that no one who has served our country should have to battle blindness alone. It provides blind and vision impaired ex-Service men and women with lifelong support including welfare support, rehabilitation, training, residential and respite care.