Gina Allsop, a Royal Signals veteran from Brighton, was supported by SSAFA, the Armed Forces charity last year after she was knocked off her bike in a hit and run. Now Gina is repaying the charity by publishing a poetry book to raise money and say thank you for the support she received. 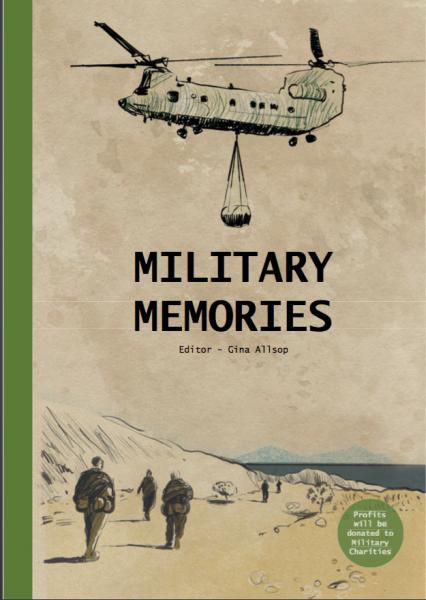 The book, titled ‘Military Memories’, is a collection of poems written by veterans, serving personnel, families of those who have served, and the wider forces family. The profits of ‘Military Memories’ will go towards a number of military charities, including SSAFA, the Armed Forces charity.

The book contains poems from thirty poets who have all contributed to the book and have a military connection. ITV presenter, Lorraine Kelly, is one of the contributors, as well as radio presenter, Joe Carden.

“The poems illustrate the journey taken by those who join the Armed Forces, showing a lighter side to our families’ lives and the trauma we sometimes face. A path taken by many, told by so few. It’s a lifetime of memories shared in one little book.”

Gina was supported by SSAFA after she was knocked off her bike in a hit and run incident. She found herself in A&E injured, with her bike destroyed. She had been using the bike to support her mental health whilst caring for her brother through his terminal cancer. The day after the crash, her brother, Spencer, sadly died.

“You feel kind of helpless when you lose a family member, and my escape was cycling on a bike. It was during lockdown, so I’d be up in Liverpool cycling in between the times of seeing how my brother was and then I got run over.”

Gina walked away from the accident with minor injuries, but her bike was written off in the accident. SSAFA supported Gina and sourced funding to provide her with a new bike so she could continue to cycle following the death of her brother.

“My bike and exercise is really important to me. I didn’t realise that it was a coping method to be honest. When I didn’t have it for those few weeks – I felt like my legs had been chopped off – I didn’t have an outlet.”

Since then, Gina has completed a fundraising cycling challenge where she raised more than £10,000 to set up an art therapy class for a cancer charity and is now launching her poetry book to help more members of the Armed Forces community.

“My inspiration for this book also came from a poem I wrote for my brother’s funeral. Since it took place under Covid restrictions, we were only allowed ten people, so it was streamed on the internet. My poem was heard by a cancer hospice and they asked me to record my poem for other virtual funerals so it could be played for them. That inspired me to create this poetry book and allow more people to read the work of others.”

The book is currently available on Amazon.