You are here: Home / News / News / Runner Ryan’s fundraising bid for Poppyscotland is no small feat!

Runner Ryan’s fundraising bid for Poppyscotland is no small feat!

You could say he’s a man who does things by halves – just lots of them! Glasgow man Ryan Small is taking on the challenge of running a half-marathon each day for a month in order to raise vital funds for leading Armed Forces charity Poppyscotland.

“I was inspired to do this after watching a video with US Marine Paralympic athlete Rob Jones. Rob lost both legs above the knee and still managed to run 31 marathons in 31 days – an outstanding achievement by any standards.

“I’m really hoping to raise awareness for this great charity. Poppyscotland does so much fantastic work and everyone needs to hear about it. They are a rock for veterans in need of help and support. Doing this challenge is my way of saying ‘thank you’.

“I’m hoping that I can raise a fair bit of cash for Poppyscotland and that it will, in some way, help – even if just a little. If you see me out there, say ‘Hi’ or come and join me! Some people – well, everyone – have called me nuts, but I’m up for a challenge… and this is certainly a big one.”

Ryan, who is originally from the Borders, added:

“I started running when I was living in China and I’ve never stopped really. I only started entering races in the past three or so years, starting with half marathons, full marathons and then on to ultra marathons. My challenge starts on May 1st. Most of the running will be done in Glasgow, and the majority of that will be road running, but I really like trail running also, so being from the Borders I’ve planned a few routes down that way, too.

“I’ve never done anything for Poppyscotland before. I’ve donated lots, but not raised any money for the charity. That’s changing now, though, as the donations are starting to come in to my JustGiving page. I am really excited to get started and I feel that my training is going well. What’s more, I’ve also found myself a running buddy – a lovely dog called ‘Lola’!”

Humble Ryan is keen to give something back to all those who have served – including members of his own family:

“What I’m doing pales in comparison to what these former Servicemen and Servicewomen did and continue to do for us on a daily basis. These guys put their lives on the line for us. I have family who have been in the Forces and friends who are still in the Forces, and I’m very proud of them all.” 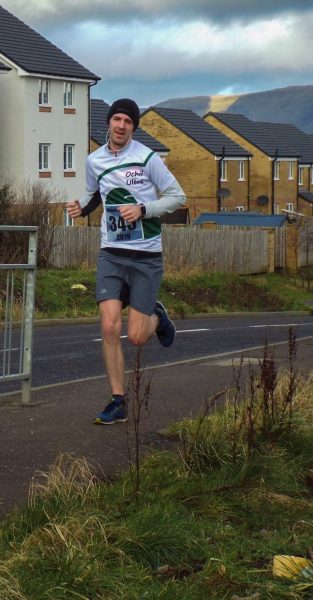 To say that Ryan’s family have done their bit in serving the country would be something of an understatement, as he explains:

“A number of members of my family have served over the years and I’m proud of them all. My great granddad, Robert Drummond Small, served in World War One. He was in Egypt, Palestine, Gallipoli, Belgium and France. My granddad’s brother, Robert Small, served in the Second World War and was sadly killed in action four days after D-Day. His unit was clearing a town and he was shot by a sniper.

“My granddad, George Small, was in the Territorial Army, while my mum’s father Drew Bell was in the RAF during World War Two. My Uncle Terry was a paratrooper who served in Ireland and the Falklands, and my uncle, Peter Simpson, was a Scots Guard. Finally, my Uncle Chris ‘Crick’ Douglas was in the TA and served in Iraq. I’m proud of every single one of them; what I’m doing is nothing to what these heroes have done and are doing.”

“Ryan’s marathon challenge is an incredible feat to be taking on and we have nothing but pride and admiration for what he is hoping to achieve. He is an inspiration to us all and we cannot thank him enough for all that he is doing to raise vital funds so that we can go on supporting the Armed Forces community and their families in Scotland.”

If you are able to donate to support Ryan’s challenge, please visit his JustGiving page at: www.justgiving.com/Ryan-Small007

• For further information and all media enquiries or to arrange an interview, please contact David A. Findlay, PR Manager at Poppyscotland, on 079797 35611, or email at d.findlay@poppyscotland.org.uk.