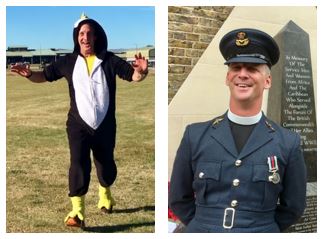 RAF Chaplain, Padre Michael Chatfield has certainly gone the extra mile to raise funds for the RAF Benevolent Fund. Not only has he decided to run the race in a penguin outfit, he had to extend his time on the Falkland Islands to do it!

Padre Michael is usually found working at RAF Odiham, having been posted there in June 2016, but was deployed for a four-month tour in November. He has chosen to take some of his post-deployment leave on the Falklands so he can compete in the Stanley Marathon and fundraise for the RAF’s leading welfare charity.

He said: “I am nervous as I know it will be a tough race. The organisers advise that ‘seasoned’ runners describe it as one of the toughest road marathons because of the challenging weather conditions. But I’m also looking forward to the challenge as it has encouraged people to give to a wonderful charity.

“As a Chaplain in the RAF I see the importance of the support that the RAF Benevolent Fund provides to personnel and their families through projects such as free access to relationship support, financial grants to people in crisis and provision of specialist advice.”

A keen birdwatcher, Padre Michael was inspired by the Falklands’ famous residents to add another layer – quite literally – to his challenge and dress up as a penguin. Training has been difficult to fit in around his busy work as chaplain, and at times he has had to battle hail, gales and blistering sunshine.

Padre Michael, 42, has set himself a target of raising £1,000 and already looks to be exceeding that. Particularly as he has invited friends and family to add a song of their choice to his running playlist – for a fee!

He added: “Some have been kind and given me songs to encourage such as world music (Calypso, Bob Marley, Paul Simon’s Graceland) which reflect the places I’ve lived (Trinidad, Jamaica and South Africa). Others have decided that songs such as Spitting Image’s Chicken Song or Sesame Street’s Doin’ the Penguin will help me run faster.”

Heather Kemp, Regional Fundraiser for the RAF Benevolent Fund, said: “Padre Michael’s support has been incredible! Not only is he running one of the toughest marathons there is – he’s doing it as a penguin!

“Dedicated supporters like this make all the difference to the RAF Family as they enable the Fund to continue our work supporting those in need. Whether it be financial, practical or emotional assistance, the RAF Benevolent Fund has stood side by side with the RAF for almost a century.”

In the last two years the RAF Benevolent Fund has spent more than £460,000 supporting RAF personnel based at RAF Odiham and their families. This includes support through free relationship counselling sessions with Relate, funding for youth programmes like Airplay and Ben Clubs, as well as individual grants to serving men and women in need.

Padre Michael will run the Stanley Marathon on March 18, to support his fundraising, go to www.justgiving.com/fundraising/michael-chatfield2