People of Falmouth, Cornwall and beyond – a sailing charity needs you!

Turn to Starboard, a charity which helps veterans affected by military operations, has launched a campaign to help fund a round Britain sailing challenge. The Round Britain Challenge 2017 sets sail on Saturday August 5 and is calling on the public to give what they can and come up with ideas to help raise funds towards the £50,000 expedition.

A team of 21 veterans affected by military operations, either physically or mentally, will challenge their minds and bodies by sailing 2,000 miles around the British Isles on board a tall ship. The 8-week voyage, which is being partially funded by The Royal Foundation, will set sail from Falmouth in an anti-clockwise direction and navigate Britain’s spectacular coastline visiting places such as Liverpool, Northeast Scotland, Orkney, Isle of Mull, Clyde, Newcastle and Ipswich. 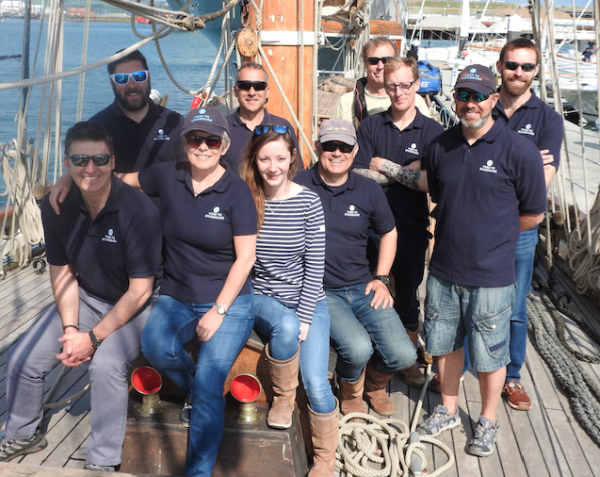 The epic expedition will help the crew – many with little or no sailing experience – to re-engage and gain new skills while helping building confidence which can lead to new careers. Some of the veterans will sail the complete expedition whilst others will join for half of the route. The team will live, sleep and work on board the tall ship donated to the charity by The Prince’s Trust. At 92 feet, and weighing in at 88 tonnes, the vessel is as long as seven cars and weighs the equivalent of a blue whale.

Turn to Starboard founder and CEO, Shaun Pascoe, said: “Following the success of last year’s Round Britain Challenge, we are excited to announce that The Royal Foundation has agreed to support a second expedition to sail a group of veterans, serving or retired and affected by military operations around the British Isles. Once again the aim of the challenge is to help participants re-engage, reintegrate and gain new skills while raising awareness of the challenges veterans can face after leaving Service life.

“Since completing last year’s expedition, 15 crew members have gone on to achieve Yachtmaster status or are close to gaining the coveted qualification. Our follow up research also found that the experience had a positive impact on participants lives and many are now engaged in another form of activity or employed. We are looking forward to the challenge and helping those taking part to regain the sense of value and belonging they were once so proud of.”

Whilst the voyage is free to participants, the cost to Turn to Starboard is estimated to be £50,000 in total, which will be partially met by The Royal Foundation.

To help reach the fundraising target, Turn to Starboard is asking people to come with ideas to raise funds, from organising coffee mornings and jumble sales to marathons or skydives.

“We urge anyone who has ever thought about fundraising to get together with friends, family and colleagues and help us support veterans affected by operations,” said Shaun. “Raising £10 would cover the cost of three miles of sail training for one crew member, while £100 pays for an offshore safety life jacket. Any support you can offer would be warmly welcomed.”

For more information on Turn to Starboard or the Round Britain Challenge 2017, visit email ellen@turntostarboard.co.uk.

Link to film documentary of the Round Britain Challenge 2016 (available to use on your media channels). https://www.youtube.com/watch?v=YrQ7mdcgLeQ