You are here: Home / News / News / Sally goes crackers for her 70th marathon

Sally Orange, a former Army Major, Mental Health advocate & UK Ambassador for the Army Cadet Force, will be running her 70th marathon at the Portsmouth Coastal Waterside Marathon on Sunday 19 December dressed as a Jacob’s cracker to raise money for SSAFA, the Armed Forces charity. 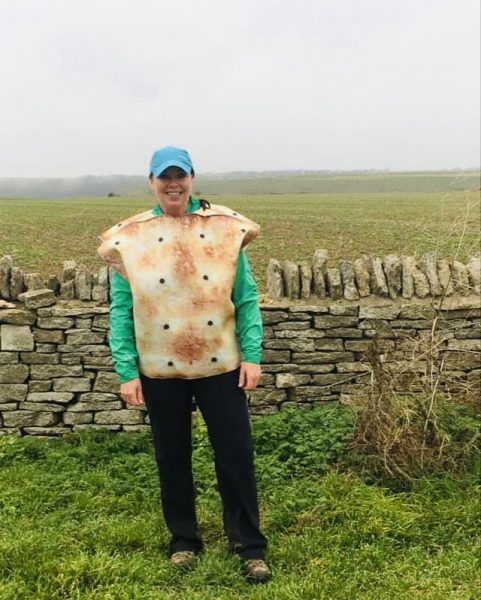 Sally is no stranger to taking on challenge events with food themes, having been the only person in the world to run a marathon on every continent dressed as a piece of fruit. Sally uses her fun costumes to break down barriers to change the conversation on mental ill health and raise money for charity.

For Sunday’s marathon, Sally will be joined by two friends, who will both be dressed in costume as well. One as a cheese slice and the other as a Christmas table Cracker, which will add a festive theme to the event.

Jacob’s will be lending their support to Sally by sponsoring her as she runs her 70th marathon.

“I’m really looking forward to taking on my 70th marathon in a fun, creative way but with a serious message behind it.

People often ask me if I’m crackers with all the marathons I have run, without realising that I suffer with a mental illness. I thought I’d embrace the concept and let people know I really am crackers about breaking down the stigma associated with mental ill health.

Christmas and New Year in particular, are times when many people struggle more than they let on, so it’s important for them to know it’s nothing to be ashamed of and the sooner they get help and talk about their difficulties, the sooner they will improve.”

“We’re delighted to support Sally as she embarks on this milestone marathon, in aid of SSAFA. It’s so important for those suffering with mental ill health to be able to access the support they need, and Sally’s fun costumes enable her to have these important conversations with those that may otherwise have felt cautious about opening up. We wish her all the luck for Sunday’s race!”