You are here: Home / News / News / Scotland’s Armed Forces Children’s charity contributes to a new book to commemorate the heroism and kindness shown to Scottish troops in London during the Great War 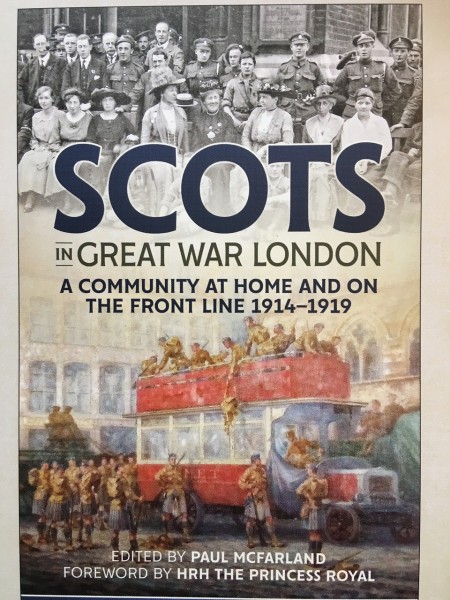 Scotland’s Armed Forces Children’s Charity, the Royal Caledonian Education Trust, is among ten organisations with long standing links with London, who have contributed to a new book, with a foreword from HRH The Princess Royal, to commemorate the centenary of the end of the First World War in 2018.

The book titled Scots in Great War London, a Community at Home and on the Frontline 1914-1919 highlights the efforts of these organisations during the First World War and will be published in late June. HRH The Princess Royal is the Patron of the Scots In Great War London Group.

The book features many stories of heroism and kindness, including the hospitality for 50,000 Scottish troops on their way to and from the trenches in France and Flanders. They were fed and entertained at St Columba’s Church of Scotland in Knightsbridge between 1915 and 1919.  This extraordinary effort, led largely by women at the church, has not till now been fully described or recognised.

Malcolm Noble, Chairman of the Royal Caledonian Education Trust, known previously as the Royal Caledonian Schools, said: “Most of the children resident in the Schools at Bushey were from armed forces families and had parents serving on one of the battle fronts, or at sea with the Royal Navy, therefore a great number of children were affected by the loss or deployment, of a parent in the forces.  This book is a reflection of  many untold stories of heroism and kindness linked with Scottish organisations supporting Scottish troops and their families as they passed through London on their way to and from war and we are delighted to receive the endorsement of HRH The Princess Royal.”

A series of commemorative events have been planned by the Group. A play, titled This is My Life, commissioned by RCET, will be performed for local schoolchildren in London.  It explores issues faced by young people with parents in the forces. The play has already been performed widely throughout Scotland. Events will also take place at the Caledonian Club, St Columba’s Church and London Scottish FC rugby club.

Rev. Angus MacLeod, Minister at St Columba’s, said: “The project enables us to honour the story of Scots in wartime London – those resident and those passing through. It highlights   themes that linked people one hundred years ago – hospitality, friendship, the meeting of need and giving of comfort, the offering of prayer. It inspires those same things today.”

To purchase a copy of the book or for further details of events and other news visit www.scotsingreatwar.london  Scots in Great War London will be published by Helion on 26th June 2018.