Scotland’s best-known military band is in the midst of its first-ever national tour – and is set to come to Aberdeen after a warm welcome from the local Provost today. The Band of The Royal Regiment of Scotland is performing at venues across the country as part of its “Walking with Heroes” centenary tour which is aiming to raise tens of thousands of pounds for Armed Forces charity Poppyscotland.

Fresh from another incredible month of spectacular performances at the world-renowned Edinburgh Tattoo, Scotland’s State Band, as it is also known, will be performing at the Beach Ballroom on September 28th. Yesterday, however, members of the Band local to the area joined Aberdeen Provost Barney Crockett and the Poppyscotland team to spread the word about the eagerly anticipated concert.

Lord Provost Crockett said: “It is an honour to welcome the Band of The Royal Regiment of Scotland to Aberdeen. We are very fortunate that the Beach Ballroom has been chosen as one of the venues for the Band to play on its seven-date centenary tour. I would also like to take this opportunity to wish them well in meeting their fundraising targets for the very deserving Armed Forces charity Poppyscotland.”

Starring in the Beach Ballroom show will be hometown heroes LCpl Mark Angus and LCpl Natalie Mair. Both hail from Aberdeen originally, and the September concert will mark the first time either has performed during their military career in the Granite City.

LCpl Angus, who has played the tuba in various military bands during his 16-year Army career, said: “The last time I performed in Aberdeen was with the brass band at Cults Academy, so I’m really excited to be back home as part of the Walking with Heroes tour.”

LCpl Mair added: “I’m looking forward to having my local fan club – well, my mum, sister and aunties! – coming along to show us their support. It’s going to be a very special night.” LCpl Mair plays the cornet and has recently returned from the Far East where she provided musical and ceremonial support in South Korea, Vietnam, Singapore, Japan and Indonesia.

Gordon Michie, Head of Fundraising, said: “It is a privilege for Poppyscotland to be in partnership with such a talented group of musicians. The tour is providing a great opportunity for music-lovers across the country to experience the unmistakable and memorable sound of Scotland’s State Band. We urge the public to get their hands on tickets for the performance Aberdeen as soon as possible as they are already selling out fast!”

As well as the tour itself, the Band is undertaking another fundraising effort in the form of The 1918 Poppy Pledge. Not only is this a lasting tribute to those who fell in the First World War, but, importantly, will also allow the Poppyscotland to make a step change in the scale of support it is able to provide those in the Armed Forces community who rely on the charity’s support today. 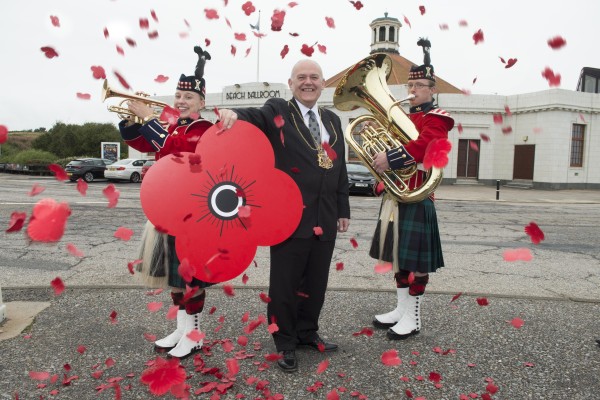