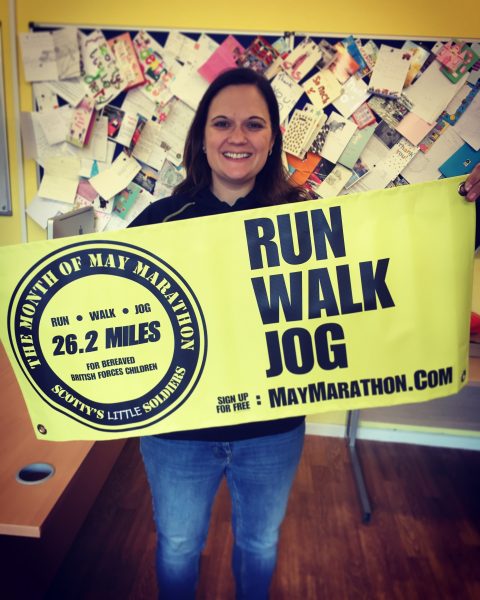 Nikki, who gave birth just four months ago, has pledged to run 26.2 miles during May as part of the Scotty’s May Marathon challenge, to help raise money so that the charity she set up can continue to deliver integral support to its members throughout the current pandemic.

Nikki will run the distance over the course of a month, following government guidance and as part of her allocated daily exercise.

The mother of four, who has openly admitted she hates running, has seen first-hand how badly her charity has been affected by the Coronavirus outbreak and is determined to do her bit to raise money by pushing herself to the limit.

“I hate running” said Nikki, “but the pain I feel when I run will be nothing compared to the pain my kids and all the Scotty’s members have been through, and still going through, after losing a parent.”

Nikki’s children, Kai and Brooke, were just five years old and seven months old when their dad, Corporal Lee Scott, was suddenly taken from them. Killed by an IED bomb in Afghanistan in 2009, Lee never got the opportunity to see his children grow up, and for Kai and Brooke, they never got to know their dad.

It was in 2010, just a year after Lee’s death, that Nikki set up Scotty’s Little Soldiers. She witnessed first-hand how losing a parent at such a young age impacted her children and wanted to help other children in a similar situation. At the time there was very little support available for bereaved Forces children, so Nikki made it her mission to be there for them and to help make them smile again.

This year is a poignant year for the charity as it marks its 10th anniversary. Over the last decade the charity has evolved, starting with just 10 members, the charity has grown and in 2019 alone supported over 400 bereaved Forces children across the UK. The charity supports its members in a whole host on ways, including providing access to the very best health and wellbeing care, offering outstanding development opportunities through a range of activity and educational grants, and Scotty’s helps put smiles back on those brave faces by providing respite breaks, posting them birthday and Christmas presents and remembering the anniversary of their parent’s death.

In recent weeks, the charity has had to adapt to the current climate and has been using modern technology and arranging exciting virtual events and activities to engage with its members as well as offering an increased level of emotional support to a great number of families who are struggling to cope with added pressures.

“We need people to help the charity now more than ever! Our members need us and to ensure we can continue to deliver a high level of support to them we need the funds to help us do that. Every penny raised from my challenge and the May Marathon will go towards helping children who have already had to face the challenge of losing a parent. We need more and more people to join in throughout May to help keep our charity and the support it delivers alive.”

The Scotty’s May Marathon is open to anyone who wants to take part. The idea is to complete your 26.2 miles throughout May anyway you wish.  A small walk each day as part of your daily exercise or a short run each day around the park – the choice is yours.

To support Nikki in her challenge visit https://maymarathon2020.everydayhero.com/uk/nikki-s-may-marathon to make a donation.

Nikki witnessed ﬁrst hand the effect the loss of a parent can have on a child. It was on a family holiday some 9 months after Lee’s death that Nikki saw her 5-year-old son Kai laugh and smile for the ﬁrst time since his dad’s death. Nikki realised there must be so many more children who had also lost a parent who served in the British Armed Forces but hadn’t had that opportunity to smile again.

She decided to set up the charity Scotty’s Little Soldiers to do just that, to help their children smile. That was back in 2010 and since then Scotty’s has continued to grow and the support available to the children has developed. In 2019 alone, Scotty’s supported 410 children across the UK.

Scotty’s Little Soldiers was honoured to be one of seven charities chosen to benefit from donations marking the wedding of Prince Harry and Meghan Markle and the couple have since shown regular support for the charity.