You are here: Home / News / News / Scotty’s Little Soldiers invite you to get back in the saddle for this year’s Tour De Scotty Challenge 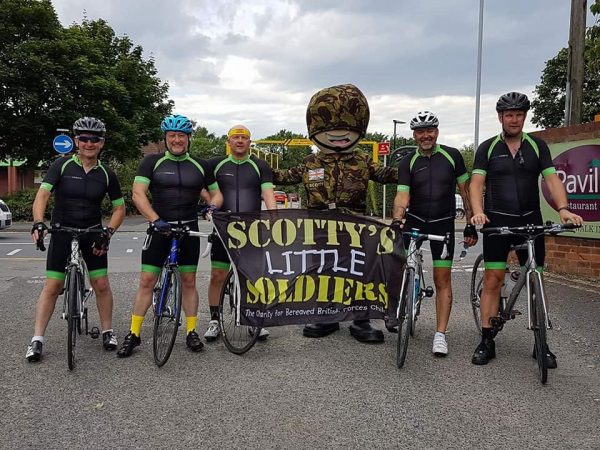 The Tour De Scotty is one of the many fundraising events created by Scotty’s and has continued to build momentum since it first launched in 2018. Participants sign up and choose to cycle either 300 or 600 miles during the month of July.

Money raised through Tour De Scotty goes towards supporting hundreds of children and young people who have experienced the death of a parent who served in the Armed Forces.

Supporters who have taken part in previous years all have their own reason for doing so. Last year Paula Wilce cycled in memory of her son, Private Ross Standing, who died in a car accident in July 2019. Ross was just 27 when he died. He left behind three young children, Luca (9), Nyla (4) and Amaya (2) who, over the last two years, have been supported by Scotty’s Little Soldiers.

Like Paula, Scotty’s friend and supporter, Lee Cox also had a special reason for taking part in the 2020 Tour De Scotty. The former soldier not only cycled to raise money for Scotty’s but also his close friend and former comrade, Dave Oates, who passed away last year, aged 49.

Dave left behind a young son, Ned, who has is now supported by Scotty’s Little Soldiers. In honour of his close friend, Lee donated his Tour De Scotty cycling shirt, medal, and certificate to Ned and raised over £500.

“Scotty’s Little Soldiers is such a great charity and we always do what we can to keep raising money. Due to what’s happening in the world at the moment, it’s incredibly hard for charities to maintain their levels of funding, so whatever we can do, we will do, to make sure that Scotty’s stays in the lives of the children it supports.”

A number of other fundraisers are veteran Tour De Scotty challengers, having taken part in both events and each time really pushing themselves to the limit, going way above the 600-mile mark. Former RAF Physical Training Instructor, Dominic O’Sullivan is one of them. He took part in the 2018 and 2020 challenge and last year hit a record distance of 913.5 miles throughout the month.

“Tour De Scotty is a great way to keep the awareness and fundraise for the charity, I hope people who don’t usually cycle get on their bike and get the miles in for Scotty’s. Who knows it may be the start of something bigger for you! It was for me!”

Scotty’s Little Soldiers, which was set up in 2010 by war widow Nikki Scott, offers integral support to children and young people who have experienced the death of a parent who served in the Armed Forces.

“I love Tour de Scotty, and I’m really excited to see everyone getting involved again this year. The support we had last year was fantastic and despite the ongoing challenges with the pandemic, people still took part and showed their support. Having the option to cycle indoors or outside makes it easier to get involved and you have the choice of how many miles you want to complete, although I know many of our supporters do like to push themselves and go beyond this.

“All of the money raised through Tour De Scotty means so much to us and our members. The last year has been particularly challenging, especially for our members, so every penny raised really does make a difference. It means we can continue the work that we’re doing and ensure that every bereaved Forces child or young person feels part of a supportive community and never feels like they are going through this alone.”