National bereaved Armed Forces children’s charity, Scotty’s Little Soldiers, has announced the return of its May Marathon challenge for the fifth year running. The challenge has built a huge momentum over the last few years, and the charity expects this year to be even bigger. 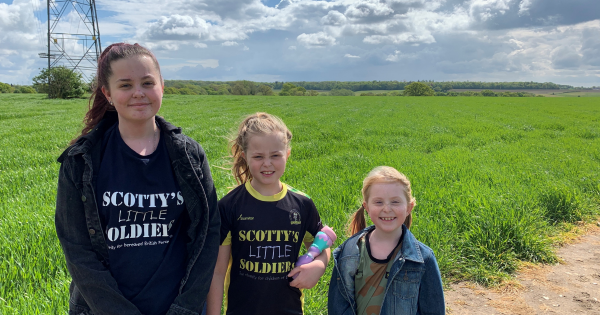 The May Marathon is one of the many fundraising events created by the charity and has continued to grow in popularity since its launch in 2017. Participants sign up to complete the marathon distance of 26.2 miles over the course of the month in any way that they choose, whether that’s walking, running, crawling or even hopping – the more creative the better.

The 2020 May Marathon event hit a fundraising record for Scotty’s. Despite the ongoing pandemic and lockdown restrictions being in place, Scotty’s supporters and members came out in mass to take part in the 26.2-mile challenge and raised over £20,000 – over double the amount raised at the inaugural event in 2017.

Since its launch in 2017, the May Marathon has continued to attract the attention of new supporters, as well as many of the charity’s loyal fundraisers, including its young beneficiaries.

Many Scotty’s members have completed not only one, but two or three of the May Marathon challenges over the last four years and in total have raised almost £15,000 between them.

15-year-old Scotty member, Charlotte Durban took part in the challenge for the first-time last year. Charlotte’s dad, Sergeant Gary Durban, who served in the Royal Logistics corps, died in January 2017 from Motor Neurone disease. She completed the May Marathon last year in his memory and raised over £600 for Scotty’s.

“I just wanted to be able to give something back. My favourite thing about Scotty’s is that we can all come together as a family.”

Sisters and Scotty members, Molly (17), Emily (10) and Isabelle (8) Reynolds have completed the challenge twice in the last two years, all in honour of their dad, Sergeant Antony Reynolds, who took his own life in July 2018.

The girls decided to take part in the challenge for the first time in 2019 as a way of marking their dad’s birthday on 9 May. Their mum, Sarah said:

And it’s not just Scotty’s beneficiaries that get involved. Over the years, the May Marathon challenge has helped engage a whole host of fundraisers, many returning year on year to complete the challenge, and raising much needed funds in the process.

Last year, avid fundraiser and columnist, Jenny Beake, took to the streets dressed as Wonder Woman, all in the name of charity. Jenny completed her May Marathon challenge for the second year running and raised over £900, while turning a number of heads in the process.

“Running the May Marathon again was an absolute pleasure, the work that Scotty’s does is outstanding, and I will continue to support the charity where I can and help those little heroes, all while having some fun dressed as Wonder Woman, hopefully I lifted some spirits!”

And not all May Marathon challengers decide to run the distance. Scotty’s supporter, Brendan Holmes, set the bar high in 2017, when he took to his challenge wearing flip flops. Not only did he complete the challenge wearing questionable footwear, but he completed an additional 74 miles taking his total mileage to 100 by the end of the month.

“I truly believe that the work Scotty’s does has a huge benefit to its members. It gives the children a real sense of community and lets them know that there are people out there who care.

Scotty’s Little Soldiers, which was set up in 2010 by war widow Nikki Scott, offers integral support to children and young people who have experienced the death of a parent who served in the Armed Forces.

“I’m really excited about this this year’s May Marathon. The support we had last year was just incredible. I was overwhelmed that at a time when people across the country were struggling with lockdown and the impact of the pandemic, they still came out and raised a staggering amount of money for Scotty’s. I took part myself, so I know how hard it is. I hate running, but I got a real buzz from knowing what I was doing was helping bereaved children and young people. The small amount of pain I felt running was nothing compared to the pain they endure.”

“I hope this year will be even bigger. Our members are some of our biggest supporters and it’s great that so many of them take part. The May Marathon provides them with an opportunity to get involved, raise money and do it in their parent’s memory. The last 12 months have been challenging for everyone, especially the children and young people we support. The money raised from the May Marathon challenge will go such a long way in helping us continue to deliver a high level of support to our members, at times when they need it the most.”

To register for Scotty’s May Marathon challenge visit: www.maymarathon.com