14-year-old Jamie Small from Woodbridge, Suffolk, is hosting ‘Jamie’s Fun Day’ at Woodbridge Football Club on 22 May. He is aiming to increase mental health awareness and raise funds for Scotty’s Little Soldiers, Hidden Warriors and SSAFA – three charities that have helped Jamie in the aftermath of his father’s suicide in 2016. 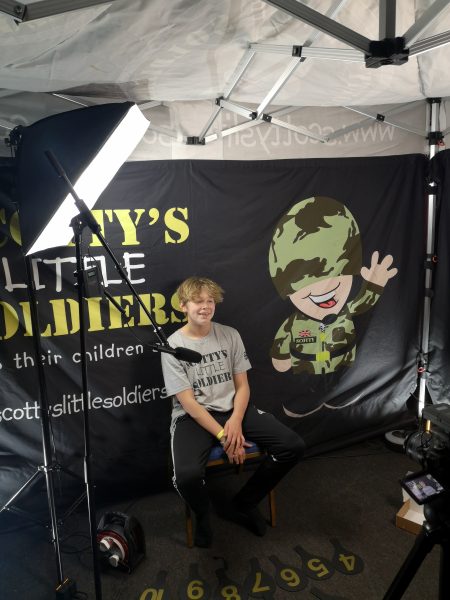 Jamie’s dad, Corporal Christopher Small, died by suicide after struggling to adapt to life after the Army. He was 44 years old at the time of his death, and spent 21 of those years serving as a proud member of the Royal Logistic Corps.

Jamie has been a member of Scotty’s Little Soldiers since 2019. The charity supports children and young people who have experienced the death of a parent who served in the British Armed Forces.

Jamie, who was eight when his dad died, said:

“Mental health is so important because we can all suffer. Someone might be feeling absolutely amazing one minute, then the next they’re just feeling the worst they’ve ever felt. I’m doing my charity fun day because I want to draw attention to the charities that have helped me over the years and give something back.”

“He wants to say thank you to Scotty’s, SSAFA and Hidden Warriors for all their support since his dad took his own life in 2016. Jamie came up with the idea when he was being bullied because of the way his dad died and realised lots of people need to be educated.”

The Fun Day includes activities ranging from charity football matches to inflatables, tombola, food stalls, a raffle and more. Jamie’s fundraiser has almost reached his goal of £4000 for his three chosen charities, he just needs one more push.

One of the day’s activities is a charity football match between a group of veterans and some of the England Supporters Club. Jamie is a huge football fan and Liverpool supporter – something he shared with his dad – and being able to hold the event at their local club is very special to him.

“Football helps me feel connected to my dad and reminds me of the time we spent together. We always used to play together and watch Liverpool on the TV, screaming whenever someone scored.”

But football isn’t the only thing Jamie holds close to his heart – since become a member of Scotty’s Little Soldiers he has benefitted from services including respite breaks, gifts and ‘Thinking of You’ vouchers on the anniversary of his dad’s death, and Scotty’s events and Christmas parties where he’s been able to make friends with other children who have also experienced the death of a military parent.

“Scotty’s is a place where I don’t have to hide my feelings – I can completely be myself because I know if I want to talk about my dad everyone there will get it. Going to those Christmas parties and other Scotty events, meeting people who have experienced similar things to me… it’s all really helpful. Being able to have those conversations with people who understand you, even it’s just a quick 5-minute chat, can really boost someone’s spirit. There are people who say “I know what you’re going through” when they don’t, but people from Scotty’s really do.”

“I’m very, very proud of him, and his dad would be too. He’s done an awful lot to raise awareness. At the age of 8 I had to tell him that his dad had died, but seeing him use his grief in a way that helps others is something lots of people could learn from.”

Scotty’s Little Soldiers was set up in 2010 by war widow Nikki Scott and offers integral support to children and young people aged 0-25 who have experienced the death of a parent who served in the British Armed Forces. Nikki saw the devastating impact the death of her husband, Corporal Lee Scott, had on their two young children and wanted to help others in the same situation.

The charity aids hundreds of bereaved Forces children and young people around the UK, offering services such as guidance to parents and carers, access to child bereavement support, personal education and learning assistance (including grants) and fun activities such as holiday respite breaks and group events. These are all designed to remind those supported by Scotty’s that they are not alone.

“Jamie is an inspiring young man and it’s incredible to see how he has used his experiences to help and educate so many people. His Fun Day has already raised an incredible amount, and hearing how he feels about Scotty’s and meeting other members highlights why what we’re doing is so important. He’s so close to achieving his goal and I can’t wait to see where it goes from here!”

To donate to Jamie’s fundraiser, click here. If you’d like to attend the Fun Day, simply visit Woodbridge Football Club on the 22nd of May and pay at the gate.