You are here: Home / News / News / Sebastian ready to run fifth May Marathon after raising £3000 in memory of his dad

This year, he once again plans to tackle the 26.2 mile journey for the charity that has offered his family so much support these past 5 years, and is doing so with characteristic cheer and determination. 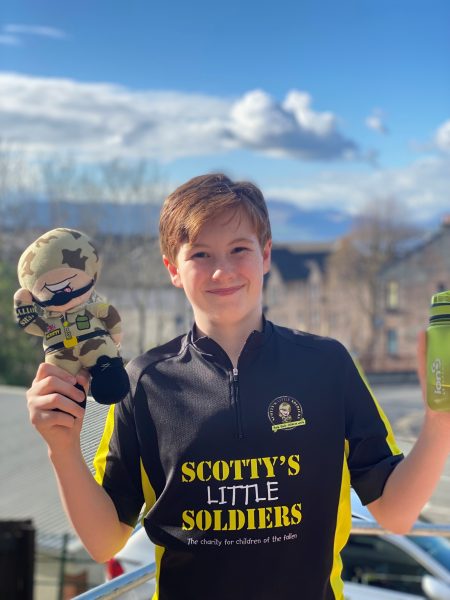 “It’s 0.97 miles to my school and back, so just under a mile,” says Sebastian. “We put on our Scotty t-shirts and go on extra walks, too, to make sure we see some different views. I checked a couple of days ago and we’ve raised over the goal already and it’s not even May! Lots of my dad’s friends know about Scotty’s and donate to my fundraisers, which really helps.”

Since starting his first ever May Marathon, Sebastian has raised over £3000 for Scotty’s Little Soldiers – something neither he nor his mum, Caroline, knew about until now.

“That’s amazing,” Sebastian says. “I didn’t realise it was that much.”

Once Sebastian has completed the upcoming May Marathon, he will have covered a total of 131 miles for Scotty’s Little Soldiers. That’s already a huge amount, but Sebastian has no plans of stopping: “Scotty’s is like a second family. I love everything about it and I’m always thinking of ways to help out. Me and some pals already have a couple more fundraisers planned.”

“I think what Sebastian has done is quite outstanding, that he’s wanting to give back to the charity that gives him so much joy.”

Scotty’s Little Soldiers was founded in 2010 by war widow Nikki Scott, with the aim of supporting bereaved military children just like Sebastian. All his hard work helps fund the family programmes he himself has benefitted from, and even earned the attention of his local press.

“He’s been in the local paper the last couple of years,” Caroline explains. “They did some articles on him and got a photographer to come up – it was announced in our church as well. Because of that, lots of people who wouldn’t normally give to the charity have done. He’s a wee local hero.”

Sebastian’s desire to help others is something his father shared. Shortly before his death, John appeared on the Queen’s Birthday Honours list and was awarded the MBE for his years of work with HCPT, the Handicapped Children’s Pilgrims Trust.

“John and Sebastian are so similar,” says Caroline. “They both have this drive to do things, and even stuff as small as their mannerisms are the same. He’s currently sitting with his legs crossed like John used to, and he’s starting to look like him as he gets a bit older as well. He’s quite like his dad in general, even though he’s only really had me around.”

Caroline and Sebastian first heard about Scotty’s Little Soldiers in 2017. They were attending Party at the Palace, honouring the children of those who have died serving in the Armed Forces. The event took place in Buckingham Palace and was hosted by the Duke and Duchess of Cambridge and Prince Harry.

“Meeting lots of other people who have lost their dad and knowing I’m not the only one is really comforting,” says Sebastian.

“John would be super proud of him,” adds Caroline. “I wish he was here to see what Sebastian is achieving. He’d be so chuffed with everything he’s doing for charity – especially a charity like Scotty’s, that does so much good for both children and the military.”

Scotty’s Little Soldiers aids hundreds of bereaved Forces children and young people around the UK, offering services such as guidance to parents and carers, access to professional child bereavement support, personal education and learning assistance (including grants) and fun activities such as holiday respite breaks and group events. These are all designed to remind those supported by Scotty’s that they are not alone.

“Sebastian is an inspiring young man who always goes the extra mile for Scotty’s. Hearing how much the charity means to him is such a pleasure, and the amount he’s raised over the years is truly incredible. The May Marathon is our most popular event, and it’s people like Sebastian who help make it a success and ensure we can continue delivering our members all the support they need.”

Donate to Sebastian’s May Marathon challenge.