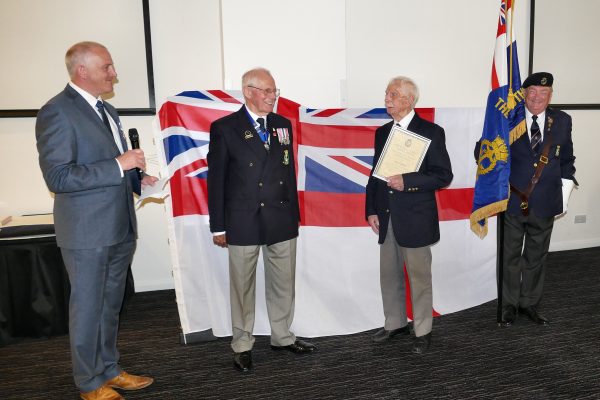 The presentation took place after the AGM in the Branch’s temporary home the China Fleet Country Club at Saltash. The Chief Executive Officer of the club, Gordon ‘Gee’ Hannah MSM made an eloquent and informed speech Gee being of the gunnery world himself, he then went on to present the Certificate to a very surprised and highly delighted Veteran Jack. A further surprise was an invitation by the CFCC for Jack and a companion to enjoy an Afternoon High Tea at the Club.

Jack joined the Royal Navy in 1942 at the age of 17 , trained as a gunner to serve on Merchant Vessels known as ‘DEMS’ . Jack went on to serve world wide, Atlantic Convoys, Med Convoys, Near East, Middle East and Far East, often aboard ‘Liberty Ships’ built in the USA and Canada. On one occasion he took passage on a warship, HMS SHEFFIELD from Rangoon to Colombo in Ceylon, on another his ship transported train engines to Russia (Arctic convoys). Jack’s worst encounter, on a Med Convoy watching on in horror from his gun platform he witnessed eight troop
ships go down while the convoy resolutely steamed on toward the Suez.

It was not until l947while in the port of Charleston USA that Jack finally received his de-mob notification, his ship eventually returned to Cardiff were instead of going home he was charged with decommissioning, removing and returning the guns and ammunition. In all that time Jack was awarded 2xTdays leave.