You are here: Home / News / News / Soldier from Kent attempts Southampton Marathon in a 33kg bomb suit for military charity 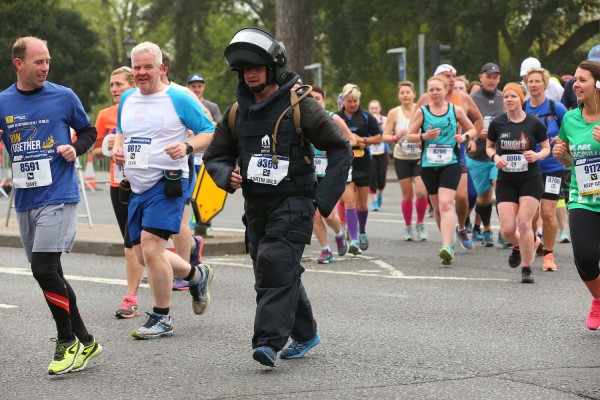 A man from Kent has attempted the Southampton Marathon for Blind Veterans UK, the national charity for vision-impaired ex-Service men and women.

Martin Wilson, 38 and currently stationed in Germany, attempted to complete the 26-mile course in a bomb suit, weighing 33kg.

While Martin was unable to finish the whole course, he still managed an incredible 13.1 miles, despite the extra weight. He says: “It didn’t quite go to plan! It was hard, really hard. I really underestimated just how difficult running in a bomb suit would be. I hadn’t trained in the suit while wearing shorts so I had massive friction burns which made it really painful to run. The restriction of movement obviously had an effect as I couldn’t get a decent stride, plus it was an exceptionally warm day and with the helmet weighing 7kg I really was struggling!”

Martin continues: “In the end I finished the half marathon in four hours 30 minutes. I was unable to continue as I was 35 minutes out of the cut off time for the half way point.

“Fortunately, given what I was wearing, lots of people spotted me so the donations are still coming in. It’s a real shame I was unable to finish the full marathon but I just didn’t have enough time to properly train in it.”

Despite his disappointment, Martin already has his sights on his next challenge. He explains: “I think I know what I’m going to do next – two miles of burpees!”

Martin has served with the Princess of Wales’s Royal Regiment for over 19 years, and is currently the Warrior Sergeant of 4 platoon B Company.

He says: “My brother and stepbrother both served in the army for 22 years each, my wife’s grandad did National Service and I met my wife while she was also serving, so it’s fair to say I’ve got plenty of connections to the military!”

“My wife’s grandad, Albert, actually received support from the charity in the 1990s. We’ll never forget the amazing help the charity were able to provide him with; they truly helped him to regain his confidence and lead an independent life, so I’m honoured to help them in any way possible.”

Indeed this year’s marathon, which took place on Sunday 23 April, was not the first event Martin has run on behalf of Blind Veterans UK, having competed in the impressive Atlantic Coast Challenge last year.

The inspiration for the bomb suit came from Martin’s connections to Morgens Advanced Materials, a specialist manufacturer who supply invaluable body armour plates to HM Forces, thereby helping to save countless soldiers’ lives.