You are here: Home / News / News / Soldier from Kent to take on Southampton Marathon in a 33kg bomb suit for military charity 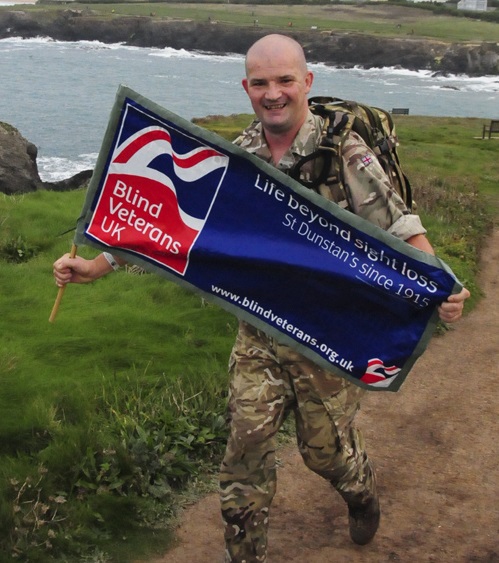 A man from Kent is preparing to take on the Southampton Marathon for Blind Veterans UK, the national charity for vision-impaired ex-Service men and women.

Martin Wilson, 38 and currently stationed in Germany, will be running the 26-mile course in a bomb suit, weighing 33kg.

Martin has served with the Princess of Wales’s Royal Regiment for over 19 years, and is currently the Warrior Sergeant of 4 platoon B Company.

He says: “My brother and stepbrother both served in the army for 22 years each, my wife’s grandad did National Service and I met my wife while she was also serving, so it’s fair to say I’ve got plenty of connections to the military!”

“My wife’s grandad, Albert, actually received support from the charity in the 1990’s. We’ll never forget the amazing help the charity were able to provide him with; they truly helped him to regain his confidence and lead an independent life, so I’m honoured to help them in any way possible.”

Indeed this year’s marathon, which will take place on Sunday 23 April, will not be the first event Martin has run on behalf of Blind Veterans UK, having competed in the impressive Atlantic Coast Challenge last year.

This year, Martin, who’s currently based in Paderborn, Germany, has his sights set not just on just finishing the gruelling course in under six hours, but on doing so while wearing a 33kg bomb suit. He says: “I’m well aware it’s a bit mental! I know it’ll be worth it in the end, though. It’s going to be a great achievement and let’s be honest, not many people can say they’ve done it themselves!”

The inspiration for the bomb suit comes from Martin’s connections to Morgens Advanced Materials, a specialist manufacturer who supply invaluable body armour plates to HM Forces, thereby helping to save countless soldiers’ lives.

Martin, whose rigorous training schedule has seen him running up to 42 miles per week, encourages others to take the leap and push themselves to their limits. “Whether you truly believe you can do it or whether you’re just considering it, the first step is signing up. Believe in your own ability and you won’t ever look back; trust me, the feeling you’ll experience afterwards will be indescribable.”

The ABP Southampton Marathon will be taking place for the first time. The predominantly flat route is perfect for first-time runners and offers participants the chance to experience a feast for their eyes with beautiful views of the city, the River Itchen and out to the sea towards the Isle of Wight.

To support Martin as he takes on the Southampton Marathon for Blind Veterans UK, please visit www.justgiving.com/blind-vets.

➡️@VeteransGovUK and @GDSTeam are looking at how to make it easier for Veterans to prove their status when accessin… twitter.com/i/web/status/1…