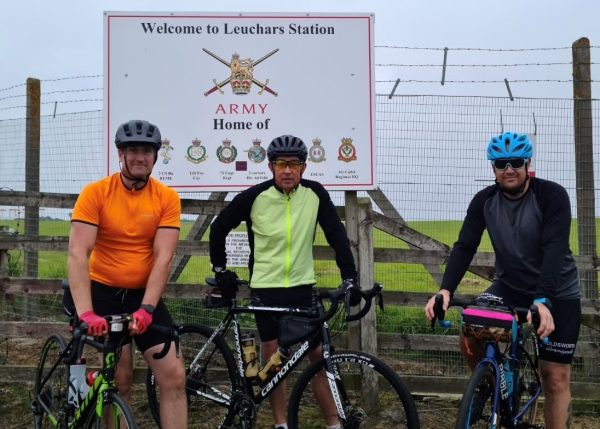 Leuchars-based Staff Sergeant Billy Henderson along with Inverness Army recruitment colleague Colour Sergeant Alfie Macdonald, and Dundee-based Sergeant Lee Davidson each cycled 400 miles each throughout August as part of their fund-raising efforts. The trio then completed a 60 mile group cycle on Thursday 2nd September from Leuchars to SVR’s supported accommodation centre at Whiteford House in Edinburgh.

They have so far raised over £1200 to support the work of the charity which also operates veterans’ services in Glasgow and Dundee. Further donations are still being accepted on the group’s Just Giving page here.

The cycle challenge is one of a number of fund-raising activities led by Billy Henderson for SVR. He has participated in an annual Movember initiative over the last three years to raise money for the charity and, when he was married in 2015, Billy and his wife asked guests to give donations to SVR instead of wedding presents

“I came into contact with Scottish Veterans Residences when I attended a charity event a few years back and was really impressed with the support and facilities they provide to homeless veterans. Since then, I’ve tried to raise money for the charity through a range of activities. I would like to thank everyone who kindly donated to support our cycle challenge.”

“We’d like to thank Billy and his colleagues Alfie and Lee for their superb efforts in raising funds to support the work of SVR. They have all put in a lot of hours since the beginning of August to complete this challenge which has generated much needed donations to help with our ongoing work in supporting homeless veterans across Scotland.”