A blind veteran from Somerton developed a passion for ukulele making during lockdown and ended up making 14 of the instruments. 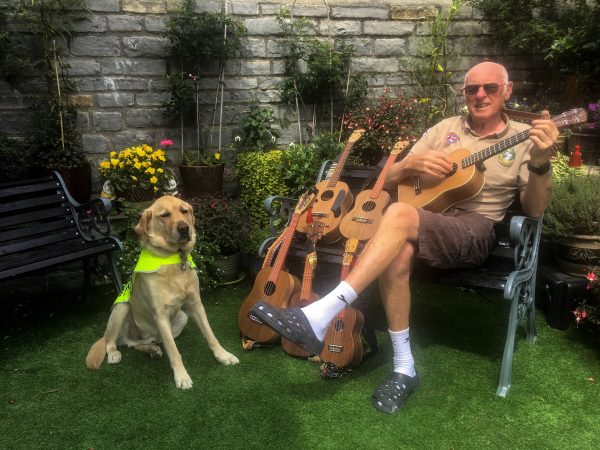 74-year-old Army veteran Haydn Callow starting making the ukuleles when he gave up on becoming adept enough at playing them. He says:

“I’ve always dreamed of playing a musical instrument but no matter how hard I try I can never get the hang of it. I guess I’m just not musical in that way.”

Father of three and grandfather of six Haydn made his first ukulele using a kit purchased off eBay. As he improved his skills he started to order exotic woods from a luthier in Derbyshire. He says:

“It doesn’t take long to put one together and it’s fantastic fun. At first they weren’t great but my skill level is improving with each one. My ukulele teacher decided to buy one so they can’t be too bad!”

Haydn’s ukuleles are made using American Walnut, Ovangkol, Sycamore and Cedar. Their neck is made using Mahogany because of its strength and fretboards using Ebony or Pink Ivory.

Haydn entered the Army as an apprentice at the age of 16 and spent 22 years in the Royal Army Dental Corps, including tours of Bahrain, Northern Ireland, Brunei and Germany.

It was later in life at the age of 52 that he was diagnosed with genetic condition Retinitis Pigmentosa (RP), which caused a steady decline in his sight until he was officially registered blind. He says:

“The RP has meant that I’ve now got severe tunnel vision in both eyes. Obviously it gives an added challenge in producing the instruments but you get used to it.

“It’s great to know that the support is there from Blind Veterans UK when I need it. They’re in touch throughout the year and although at the moment I’m keeping fine, I know they’re only a phone call away if my sight deteriorates further.”