You are here: Home / News / News / South Shields Veteran on the road to recovery with Roxy and a round-Britain fundraiser for SSAFA

A journey of a thousand miles begins with a single step, so goes the proverb, but as Andrew Marshall of South Shields prepares to set off – with Roxy, a converted Ford Transit minibus – on November 15 a motoring fundraiser for SSAFA, the Armed Forces charity, he has already passed a few milestones. 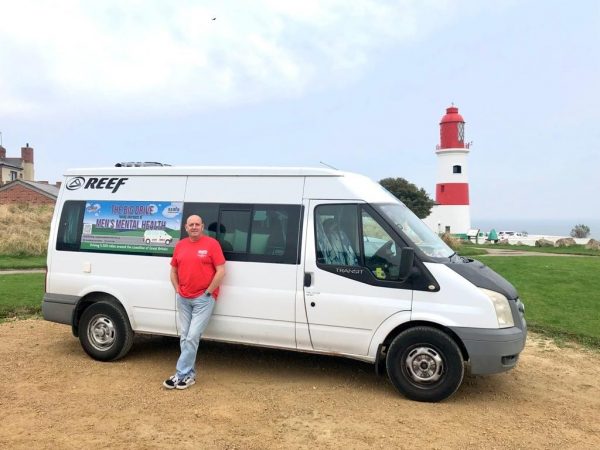 Andrew, aged 49 and a Royal Navy veteran, has turned his life around – thanks to SSAFA -after a few struggles over recent years.

He served as an Aircraft Engineer in the Fleet Air Arm on Sea King helicopters on front-line squadrons operating off HMS Invincible and the support ship RFA Argus, leaving in 1995 after seven yeas’ regular service before putting in a further three in the Royal Naval Reserve.

However, personal battles including anxiety over his business, debt, alcohol dependency, a brush with the law, and the breakdown of his marriage took their toll on Andrew, one problem adding to the weight of the others, leading to his mental health declining.

Andrew, now studying Health and Social Care at the University of Sunderland, takes up the story:

“I had all of these red flags and warnings, but I still thought I could turn things around. I was wrong; I had waited far too long to reach out for help.

“That point came in 2018, and I reached the lowest point in my life. I had been through years of emotional stress, turmoil and reached a point that I felt the best thing for everyone would be if I was no longer here. I was so poorly with my mental health that I tried to take my own life.

“But I did eventually reach out and contacted an alcohol help service in South Shields. Staff there started to help unravel and help me start my recovery. I joined NAAFI Break, a local ex-forces charity really to socialise and give some structure to my week. There, I met a lady from SSAFA who helped me with my financial and housing problems.”

Andrew said that SSAFA has helped his recovery immeasurably since then, adding:

“SSAFA’s caseworker helped me secure housing as I was losing my home at that time, and also helped with furnishings, carpets, and some initial bills and debts.”

Explaining why he decided to drive the coast of the UK in a converted minibus for charity and to highlight concerns about men’s mental health, Andrew said:

“When I was ill with my mental health, I developed severe anxiety which affected all aspects of my life, one of the biggest impacts was my ability to drive. Over the years, the anxiety became much worse, it seemed as though the distance of where I could drive was becoming smaller and smaller. The anxiety became so acute, that eventually I could no longer drive. I couldn’t even drive to my support meetings which were less than a mile away.

“I faced my challenges and in June 2020, I bought a Ford Transit minibus that I started to convert into a campervan. My reasoning was that if I started to panic when I drove anywhere, I could pull over and stay in Roxy until it passed.

“I bought a road atlas with a plan to try and drive further than the South Shields page. Little by little, step by step, I have slowly expanded my horizons and have now managed to drive around 19 pages and will soon set off on covering the whole of the UK’s coastline raising money for SSAFA Tyne & Wear and NAAFI Break.”

But why call the campervan Roxy?

“When I bought the minibus, it was black and white, and that reminded me of my old Border Collie who was called… You’ve guessed it: Roxy. The name stuck.”

Andrew’s adventure – which he expects to take three-to-four weeks – begins on November 15. To help him raise much-needed funds to support veterans, visit: justgiving.com/crowdfunding/andrew-marshall-gb-coastline-in-roxy.