You are here: Home / News / News / Specsavers Director from Surrey to compete in London Marathon for military charity 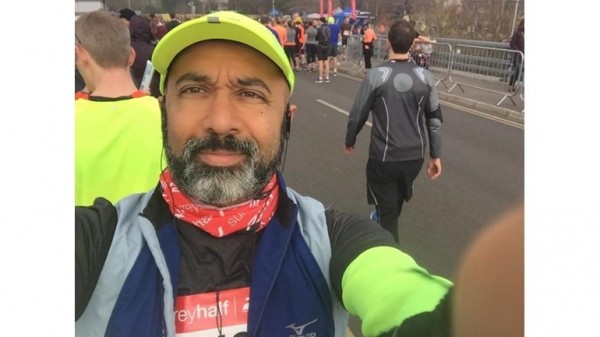 A man from Surrey is set to compete in the London Marathon for Blind Veterans UK, the national charity for vision-impaired ex-Service men and women.

Lateef Iqbal, 47 and from Farnham, opted to sign up to the mammoth 26-mile challenge after last year sustaining a knee injury which rendered him unable to partake in his extensive list of sporting interests. He says: “I injured my knee, a longstanding niggle that just wouldn’t go away, and the MRI scan basically showed that I couldn’t play badminton, couldn’t play squash, couldn’t swim or play football. The only thing the doctor said I could do was walk!”

Lateef, who’ll be both walking and running the event, first came to hear about Blind Veterans UK through his work at Specsavers, at which he’s been working for over 17 years and for which he is the Director of their Camberley, Alton and Farnham branches. He says: “Many of my patients have received their support so I’m aware of the work they do in helping blind and vision-impaired veterans adjust to life after sight loss. I’ve witnessed first-hand how they help veterans regain their confidence and independence, it really is a fantastic charity and everyone who’s involved speaks so highly of them.”

Lateef is no stranger to supporting local causes, having ensured that his branches have maintained an active presence in their local communities. He says: “We are involved in almost every school in the area in some form of fundraising, whether that’s children’s cancer, youth choirs or the Surrey Youth games. We’re also the main sponsors of the Surrey FA.  Generally speaking, our focus is on kids and activities as it’s important that we encourage young people to spend as much time outdoors as possible.”

Lateef, who is aiming to complete the course in five and a half hours, has already raised £700, £200 more than his initial target of £500. His strict training regime has already seen him complete the Hampton Court Half Marathon, the Surrey Half Marathon as well as the Fleet Half Marathon, while he’s also set to compete in the Race to the King event, an eye-watering 53-mile challenge along the South Downs Way, in June. He says: “I’d just like to keep going and going and get as strong as possible!”

To support Lateef as he prepares to take on the London Marathon for Blind Veterans UK, please visit: justgiving.com/fundraising/LateefLondonMarathon.