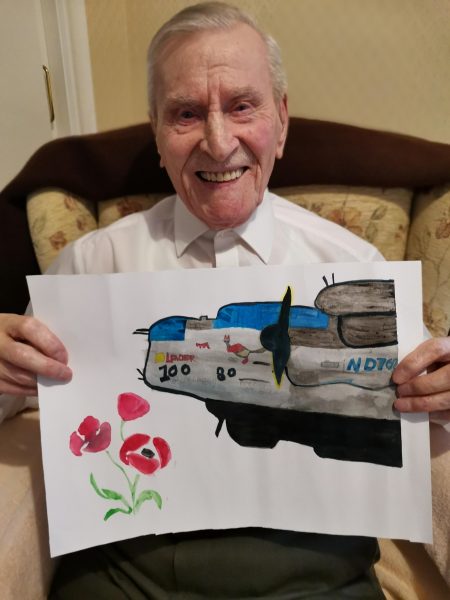 While the celebrations may have been curtailed due to Covid restrictions, they were not dampened in any way. Ernie’s remarkable and poignant story was movingly told in an online presentation by the students of East of Scotland University Air Squadron; and he received many good wishes from around the country including a personal note from the Duke of Rothesay with a bottle of Malt whisky and copy of a book produced by 14-year-old autistic aviation artist Jack Berry. This was accompanied by a hand painted picture which Jack had completed specially for Ernie, all in aid of SSAFA the Armed Forces charity.

Ernie’s remarkable story begins in the early hours of May 22 1944. Lancaster bomber pilot Ernie Holmes and his Pathfinder crew were shot down over Netersel in North Brabant while returning from a raid on Dortmund. Sadly, five of the eight-man crew were killed and are buried in the Commonwealth Graves Cemetery at Eindhoven.

Ernie only survived the attack by being thrown clear when the aircraft exploded. He hid his parachute and then headed south west until later that morning he was found by a young girl, Netje van der Heijden. She took him to her parents’ farmhouse, where her father, Fons, had hidden a number of escapees and students avoiding conscription.  At immense risk to themselves, this family sheltered Ernie for weeks while plans were made to move him on to Spain.  Ernie was reunited with his navigator and they set off on what was believed to be the KLM escape route.  Sadly, this led to a betrayal in Antwerp from where he was taken to Brussels and extensively interrogated and subsequently spent the rest of the war in StalagLuft III surviving the Long March to Lübeck from where he was repatriated.

On 20 September 1944 the farmer, Fons van der Heijden, was shot for harbouring escaping airmen, just prior to the village being liberated.

After the war, Ernie kept in touch with the family to whom he owed his life and that link has been sustained by his children and Fons’ children and grandchildren, who still live in the farmhouse.   In 2018 Ernie and his family re-visited Netersel to unveil a memorial placed by the local community at the crash site and to visit the graves of Ernie’s crew members and, most poignantly, the memorial to Fons’ memory.

After the war, Ernie continued to serve with distinction in the Royal Air Force and as a civilian flying instructor until blindness cut short his career.  Ernie now lives in a retirement home in Perth and, although blind and somewhat hard of hearing, he retains a razor-sharp memory and a lively sense of humour.

“I am thrilled that SSAFA has brought Jack and Ernie together. In congratulating Ernie on his 100th birthday, he also epitomises the service of so many veterans and why this Nation must respect and, when necessary, support them.  For Jack to use his passion and talent to help Ernie celebrate his centenary is wonderful”.