After the disappointment of the 2020 and 2021 Boston 1940s Events being cancelled because of lockdowns, the eagerly awaited fourth running of the day was a roaring success – and the Lincolnshire Branch of SSAFA, the Armed Forces charity was there. 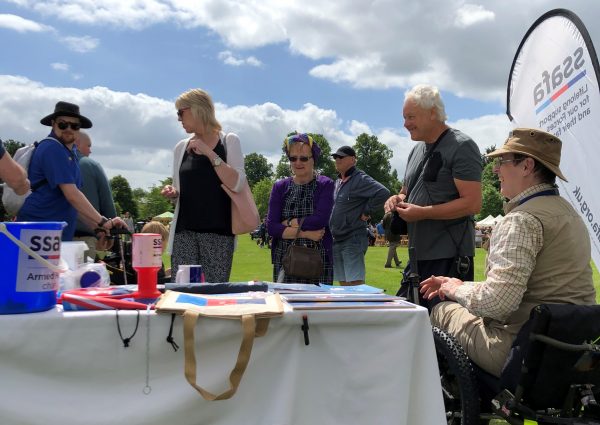 As if to make up for the two missed years, the weather gods were clearly smiling on Central Park, where crowds were thrilled by the likes of a George Formby tribute act, the Boston Ukulele Group, and Forces Sweetheart, Miss Lily Lovejoy.

Those attending also had the chance to see static WWII displays, as well as a collection of period vehicles – including agricultural machinery.

But for those manning the SSAFA stall – including Eugene “Stun” Conlin, recently awarded a Sir James Gildea Local Award for his outstanding contribution for the charity – it was an opportunity to talk with people about the life-changing work carried out, and to catch up with those who have benefitted from its support.

Stun, affectionately known as the branch’s “roving ambassador”, is a regular at events such as these and country shows, with rough ground being no match for his specialist wheelchair built by Mountain Trike and supplied to him by SSAFA – as he spreads the word about the UK’s oldest tri-service charity.

“All of us at SSAFA in Lincolnshire and elsewhere really missed the chance to get out and about over the preceding two years, and so we’re making up for it now.

“Days like the Boston 1940s Event are invaluable and a great way of not only catching up with old friends from the local Forces’ community, including those whom SSAFA has helped, but also to meet new people – including potential volunteers – to let them know about the amazing work SSAFA does day in and day out for veterans, serving members of the Armed Forces, and their families.

“Hats off to the organisers of the Boston 1940s Event, and everyone who made it such a success.”

For more information including how to volunteer or fundraise for SSAFA, or to access its support, visit ssafa.org.uk/lincolnshire.