The Queen’s Platinum Jubilee celebrations will begin at the Royal Albert Hall with the first high-profile concert presented by SSAFA, the Armed Forces charity. 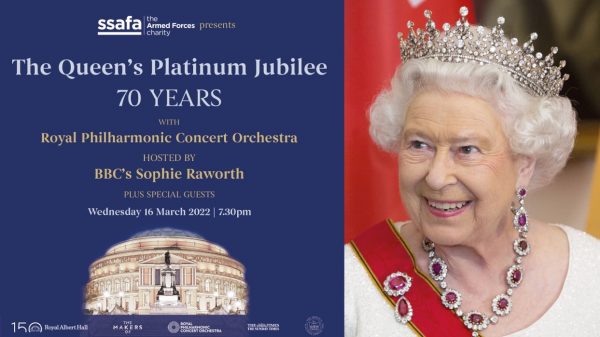 The BBC’s Sophie Raworth will host ‘The Queen’s Platinum Jubilee – 70 Years’, an evening of spectacular music performed by the Royal Philharmonic Concert Orchestra plus special guests.

Works by Great British composers including Edward Elgar, Benjamin Britten and William Walton will take centre stage, with a focus on music played at Her Majesty’s 1953 Coronation and other key moments of the Queen’s reign.

With 124 visits to the Hall during her lifetime, this event holds particular poignancy.

Special guests will recount their experiences of meeting the Monarch as the nation celebrates this special anniversary in our nation’s history.

SSAFA, the Armed Forces charity is proud to present this momentous evening in celebration of its Royal Patron.

“We are proud to be presenting ‘The Queen’s Platinum Jubilee – 70 years’ at the Royal Albert Hall to celebrate SSAFA’s Patron, Her Majesty The Queen’s reign.

“The Royal Albert Hall is at the heart of the nation; hosting events such as The Festival of Remembrance and ‘We’ll Meet Again’ for VE Day 75. It seems only fitting that on the occasion of the Platinum Jubilee, SSAFA should present one of the first high-profile events in honour of that magnificent milestone.

“Over Her Majesty’s reign, our country has seen many challenges; and it is a testament to the British people, in face of conflicts, terrorist campaigns and more recently the pandemic, that we rally, and that we have and will continue to overcome adversity. God save The Queen.”

“We’re incredibly proud to be hosting the first event of the Queen’s Platinum Jubilee year. We’ve been honoured to welcome Her Majesty The Queen, our Royal Patron, to the Hall on more than a hundred occasions throughout her historic reign, and we hope this special concert will get this coming year of celebrations off to a fantastic start.”

“The Royal Albert Hall holds a special place in my heart. As a child I used to watch The Bach Choir Family Carols conducted by Sir David Willcocks. It is somewhere I’ve visited on many occasions but this is the first time I will have hosted an evening from the stage. I’m absolutely honoured to be presenting one of the first Platinum Jubilee events and it’s certainly going to be a night to remember.”

“Never has the phrase ‘music fit for a Queen’ seemed more apt. I am honoured to be conducting this concert of great British music celebrating the Platinum Jubilee with the RPCO and to work alongside Sophie Raworth.”

Tickets for ‘The Queen’s Platinum Jubilee – 70 Years’ are available to buy from the Royal Albert Hall Box Office on 020 7589 8212 and www.jubileeconcert.com.