“My dear friends, this is your hour. This is not victory of a party or of any class. It’s a victory of the great British nation as a whole.”

On 8 May 1945, Prime Minister Winston Churchill made his ‘Victory in Europe’ speech, in which he officially announced the unconditional surrender of Germany and the end of the Second World War in Europe. 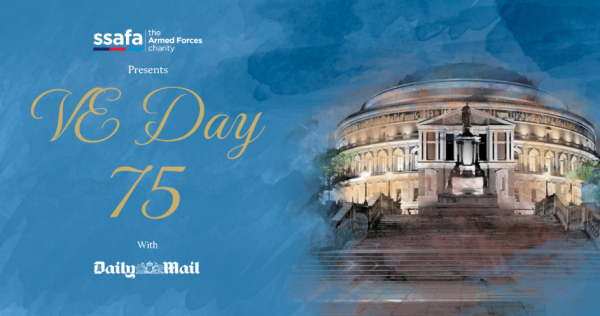 The Royal Philharmonic Concert Orchestra, plus special guests, will unite the nation on May Bank Holiday, Friday 8 May 2020 as the country reflects on this significant anniversary.

The Second World War represents the greatest conflict the world has ever seen. VE Day 75 will honour and remember those who made the ultimate sacrifice in order to liberate Europe, while at the same time celebrating the victory for Britain and its Allies.Join us for an inspiring and patriotic evening featuring the best of British. Audiences will enjoy epic, stirring and emotional music from some of the country’s greatest composers – from Elgar’s Nimrod to Walton’s Spitfire Prelude & Fugue, Holst’s Planet Suite to Ron Goodwin’s Battle Of Britain Theme and many more.

The special event will also include appearances on stage by Second World War Veterans and a line-up of guest performers, to be revealed soon.

By attending this event, audiences will be supporting SSAFA. The Armed Forces charity offers support to those currently serving, regulars and Reservists, in the Royal Navy, Royal Marines, British Army and Royal Air Force, veterans and military families – as well as veterans from the Merchant Navy.

“SSAFA is proud to present this poignant concert that will honour the men and women who lost their lives during the Second World War and also celebrate the freedom and safety that we enjoy today, thanks to our Armed Forces.

“It is our duty to keep the events of the past alive in our collective memory.  By ensuring that future generations understand these matters, it will help ensure that such a conflict never happens again. We hope that the Nation takes a moment to reflect on the significance of this date, for it was a milestone that changed the course of history for the whole world.”

“VE Day 75 will be a vital opportunity to celebrate perhaps the greatest day in British history. We are partnering with the Armed Forces charity, SSAFA, to ensure that the countless heroes of the Second World War are remembered in a night of superb music and patriotic pride.”

“We are honoured to host this event exactly 75 years to the day since the guns fell silent at the end of the war in Europe. The Hall has a long and important history of uniting the country in support for those who serve and have served, and in remembrance of all those who have lost their lives in conflict.

“I am delighted that the Hall can be the centre of this anniversary commemoration of the arrival of peace in Europe.”

“We are delighted to be performing on the Royal Albert Hall stage to mark the 75th anniversary of VE Day. It is a privilege for the Orchestra to honour and respect the dedicated and brave men and women who made it possible for us to be the custodians of our country and its diverse and developed culture that it is today.

“We welcome the opportunity to perform this fantastic programme of music for what will be a most special occasion for all who are able to attend, performers and audience alike.”

“This could be our last opportunity to say ‘thank you’ to the veterans of the Second World War. Let us never forget the heroes who gave their lives for us and for future generations. We owe it to them to responsibly cherish those liberties they fought for.”

“VE Day meant an end to nearly six years of a war which cost the lives of millions. To be a SSAFA Patron on the 75th anniversary is of huge importance to me as we remember all those involved.”

HM Government has moved the early May Bank Holiday to Friday 8 May to mark this significant national anniversary.

SSAFA, the Armed Forces charity, has been providing lifelong support to our Forces and their families since 1885. Last year our teams of volunteers and employees helped more than 82,000 people in need, from Second World War veterans to young men and women who have served in more recent conflicts, and their families. SSAFA understands that behind every uniform is a person. And we are here for that person – any time they need us, in any way they need us, for as long as they need us

The Royal Philharmonic Concert Orchestra (RPCO) is a dynamic and versatile ensemble which incorporates performances of a wide range of styles and genres across the UK and around the world. The Orchestra’s repertoire includes film music, computer video games scores, music from the musicals, symphonic arrangements of classic rock and pop songs as well as new commissions and the traditional core classical repertoire, reaching a wide and diverse audience of over 170,000 live listeners per year. The Orchestra’s creative partnerships with artists, promoters and producers has resulted in ambitious performances in venues from vast arenas to the small intimate setting of a double decker bus. The RPCO aims to reach as wide an audience as possible and is unafraid to explore new orchestral experiences.

‘VE Day 75’ is produced by Snappin’ Turtle and TBI Media, the producers behind the award-winning
‘D-Day 70’ at the Royal Albert Hall and other productions including ‘Battle of Britain 75’, ‘Dam Busters 75’ and ‘World Cup ‘66’.