Norton House, Stanford Hall has been welcoming families since Autumn 2018,  but was officially opened on Tuesday 28th May by Lady Carter, Vice President of SSAFA, the Armed Forces charity. 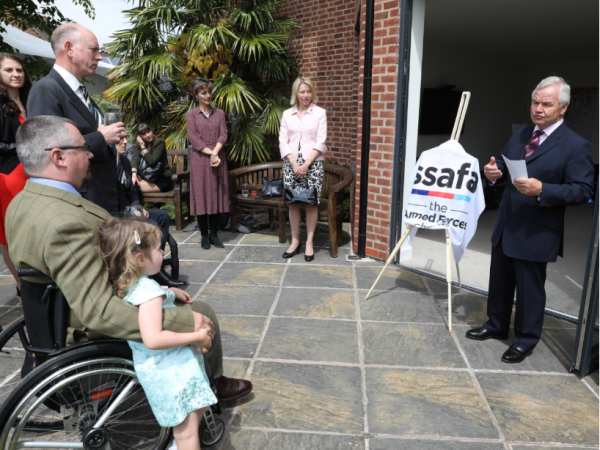 The house provides free, safe and supportive accommodation to families whose loved ones are receiving treatment for injuries at the nearby Defence Medical Rehabilitation Centre.

Norton House also provides a haven for those being treated, to allow them a break from the hospital environment, as well as having peace of mind knowing their families are in a safe and supportive environment.

The name of this new family accommodation reflects the Norton House legacy set up by SSAFA in 2008 in response to a campaign led by Major Peter Norton’s family, after he was injured whilst serving in Iraq.

Sir Andrew Gregory, CEO at SSAFA, the Armed Forces charity said: “We are proud to be continuing on from a successful decade of care with a new Norton House. Ensuring that military personnel, veterans and their families are given the help that they deserve as they undergo the challenging rehabilitation process is a key part of SSAFA’s remit. Norton House, Stanford Hall represents a new era of vital support, with emotional welfare remaining at the heart of the service. We hope that news of this official opening spreads and reaches those who may be in need of our assistance.”

SSAFA, the Armed Forces charity, would like to thank:

Louise Baverstock-Price, Group Head of Community Investment at BAE Systems, said: “BAE Systems is committed to the Armed Forces, it lies at the very heart of what we do as a company. As a signatory to the Armed Forces Covenant, we are proud to support SSAFA’s Norton House facility aiding the rehabilitation of our service personnel.”

Julian Panton said: ‘’The Army Central Fund values its long association with SSAFA.  We are delighted to contribute towards the costs of the brilliant care and support at Norton House which helps Army families get through the most challenging times’’

Patrick Hawes, composer, said: “I wrote The Great War Symphony as a musical monument to those who gave their lives in the First World War. It was therefore a perfect fit and honour to partner with SSAFA; the tri-service charity who performed such important work throughout The Great War that continues right up to the present day.  We’re incredibly proud to have been able to play a part in raising awareness of its crucial work, and to help financially with the Norton House facility.”

Brigadier (Ret’d) Robin Bacon, Chief of Staff ABF The Soldiers’ Charity added: “We are delighted that Norton House Stanford Hall is now open. It is vital that we not only support our soldiers, but also their families. Norton House will give them a home away from home to help with their emotional welfare while visiting loved ones who are undergoing rehabilitation at the DNRC. Having a supportive environment and free accommodation for loved ones is crucial to keep day-to-day stresses as low as possible.”