The Malaysian Government has presented a local SSAFA volunteer with the Pingat Jasa Medal for his military services during the Malaysian conflict of the 1960s. 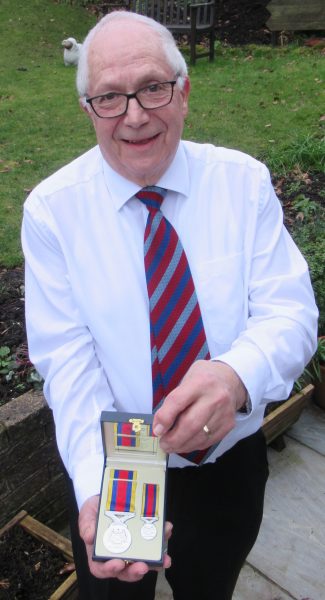 Local veteran, Clive Matthews, who lives near Kingswood, Surrey, had been out of uniform for 50 years when he contacted the Malaysian Embassy about the Pingat Jasa Medal. The medal is awarded to all those who served during the Malaysian emergency.

Clive, a former radio operator, was one of the many British servicemen and women who were sent to Singapore during this time. After completing specialised communications training at HMS Mercury at the age of 16, Clive was then sent to the Far East Fleet, where he served on HMS Bulwark, HMS Brighton from November 1964 to July 1965.

Clive missed the original deadline to apply for the medal in 2005 but applied via the Malaysian Embassy in 2019 and was awarded the medal 3 years later in 2021.

For the last 16 years, Clive has been a volunteer with SSAFA, the Armed Forces charity in the Reigate and Banstead area of Surrey. In 2017 he was awarded the Mayors Award in Reigate for his volunteering work.

“Volunteering for SSAFA has been a major part of my life. To know that I have helped so many people make it all worthwhile, and having the Pingat Jasa Medal is just a nice homage to that young sailor all those years ago.”