You are here: Home / News / News / Staff from military charity drive through 24 countries in five days to raise money for blind veterans 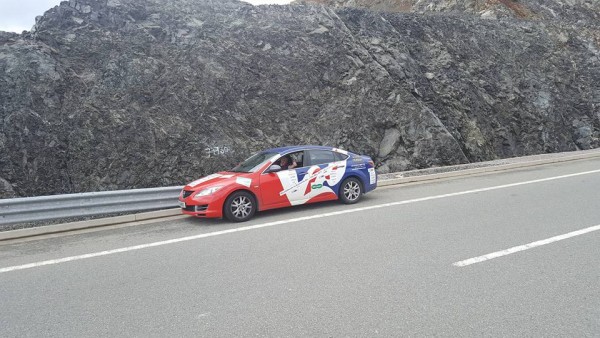 Two members of staff from a national military charity have driven through an incredible 24 countries in just five days. The funds raised will be going to the blind veterans their charity supports.

Chief of Staff, Nathan Muirhead and Head of Transport, Chris Kirk are both employees of Blind Veterans UK, the national charity for vision-impaierd ex-Service men and women.

The drive, which took place from Monday 8 – Friday 12 May, saw Nathan and Chris take in an incredible 24 countries, including but not limited to, France, Switzerland, Albania, Kosovo, Serbia and Turkey. Chris says: “It was a huge challenge. In all our planning, we somehow forgot to factor in the border crossings! On average they accounted for about 30-40 minutes each, meaning we had to drive for a lot longer than we’d originally intended!

“It made for a properly gruelling challenge, but despite the exhaustion, Nathan and I had a great time doing it and shared some hilarious moments, despite everyone expecting the two of us to be fighting for five days straight!”

Unfortunately for Chris and Nathan, some of the border officials they encountered were not in such jovial moods. Nathan explains: “I think the Bosnian border patrols in particular took a bit of a dislike to Chris and I! From interrogating me for a license for my store-bought paracetamol to berating Chris for unknowingly parking in the wrong stop, it’s safe to say we weren’t a massive hit with the Bosnian authorities!

“In the end we just shrugged our shoulders and smiled at one another. We’d secretly been hoping for something like this to happen, if only so that we could come away with a good story!”

The charity provides free, lifelong support to help blind and vision-impaired veterans regain their confidence and independence. Despite currently supporting more blind veterans than ever before, it has set an ambitious target to double the number of veterans who receive its life-changing support by 2022. Nathan explains: “The blind veteran population is aging and in five years, more than 40 per cent of the veterans we support will be over 90. In order to ensure our beneficiaries continue to receive the high standard of support we offer, we’ve invested in community-based teams of social care and rehabilitation professions. As a result, the services we provide will be closer to those that need them.”

Overall, Chris and Nathan are immensely glad having both successfully completed the challenge and also, raising just shy of £2,000. Chris says: “We were fortunate to have had some really imaginative sponsorship, including a car servicing, our Blind Veterans UK insurers insuring us and some other affiliated companies paying for the crossings. It was a great collaborative effort.”

You can continue to support Chris and Nathan’s fundraising efforts in their epic journey by visiting justgiving.com/europechallenge.