You are here: Home / News / News / Statue of blinded soldiers commemorating the end of WWI to be unveiled in Manchester

It was announced last week (25/08) that a new statue commemorating the end of the First World War will be unveiled in Manchester this October.

The statue, of seven blinded First World War soldiers, will be permanently placed outside Manchester Piccadilly Station as a memorial to the injured of that conflict.

Commissioned by military charity Blind Veterans UK, the statue, entitled Victory Over Blindness, depicts the seven soldiers after losing their sight, marching with their hand on the shoulder of the man in front.

“Blind Veterans UK enables ex-Service men and women to rebuild their lives after sight loss through free services and lifelong practical and emotional support. We support all blind veterans regardless of when they served or how they lost their sight. The statue demonstrates the life-changing impact the charity has had over the last 103 years.

“This statue is our way of commemorating the centenary of the end of the First World War and recognising the amazing work achieved by our veterans at that time and ever since.”

The sculpture was conceived and designed by artist and sculptress Johanna Domke-Guyot and funded by the generous donations of The Gosling Foundation as well as other individuals and organisations. The location of the statue at Manchester Piccadilly has also been made possible thanks to the support of Network Rail.

“I’m over the moon with how the statue has turned out. It’s been a very long journey and I underestimated how emotional I would feel about the whole process. The time I’ve had with these seven figures over these years and seeing them come to life has been really amazing.

“Bringing them to life again in a bronze that will last for years and years is overwhelming. People will be able to touch them, I want it to become a people’s piece.”

Johanna was diagnosed with Multiple Sclerosis in 1994 and studied art as a way of dealing with her illness.

She adds: “I remember deciding one day after my diagnosis that I didn’t want to give up. I went back into education and found a new love. I started the piece this bronze is based on in 2011. It was like art therapy for me and, due to relapses, took years in the end.

“My MS means that my fingers are pretty numb so people are always interested in how I’m able to sculpt with so little feeling. I have developed my own techniques over time.”

The seven First World War blind veterans will stand proudly outside Manchester Piccadilly Station and will be the only permanent memorial in the UK marking the 100th anniversary of the Armistice.

Blind Veterans UK supports over 4,700 blind and vision-impaired veterans today. More than ever before in the charity’s history and 50 per cent more than the total number of veterans the charity supported who lost their sight as a result of their service in WWI. The charity estimates there are up to 50,000 blind and vision-impaired ex-Service men and women who are entitled to their support but not aware of it.

Visit blindveterans.org.uk/victory to learn more about the statue, the charity and how you can support its vital work today. 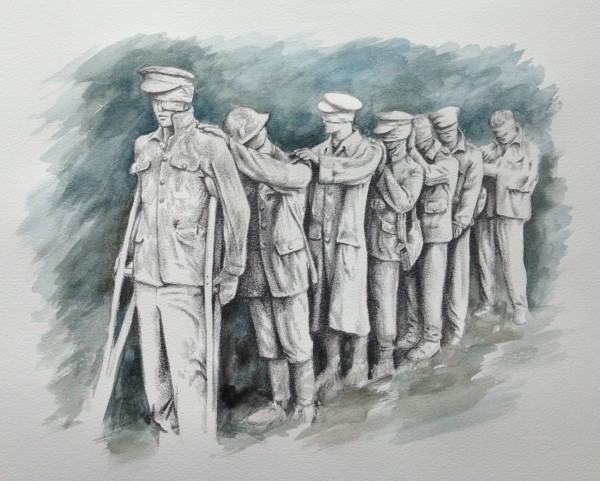 Find out more at: blindveterans.org.uk