Lady Haig’s Poppy Factory was alive with activity yesterday (Thursday, 27th September) as the near-five million poppies which are all made by hand by former Service personnel were loaded on to trucks to begin the journey to the four corners of the country ahead of the start of the 2018 Scottish Poppy Appeal.

This year’s event – which is known as the “National Uplift” – was especially poignant as it marks the first time the public will get a chance to see the newly commissioned Centenary Poppy, which has the text “1918-2018” embossed in gold across the traditional and iconic red paper poppy. It is the first change to the poppy in decades and is of part of Poppyscotland’s programme of activity to mark the Centenary of the end of the First World War.

Forty-one veterans with disabilities are employed at the Factory making around five million poppies each year, and, this year, around two million of them will be Centenary Poppies. Charlie Pelling, Manager at Lady Haig’s Poppy Factory, said: “The National Uplift is always one of the biggest days of the year at the Factory, but it’s especially poignant in 2018 given that we are commemorating the Centenary of the end of the First World War with this stunning, unique poppy design.”

The Centenary Poppy is the single biggest design change of the poppy for more than a generation. The poppy has not altered much conceptually since its inception more than 90 years ago when it was created by Lady Haig – wife of Field Marshall Earl Haig – in 1926.

Mr Pelling, a veteran himself, added: “At its peak the Factory employed more than 100 veterans, and, in total, we have employed closed to 2,000 ex-Servicemen and women over the years, the vast majority of whom suffered from some sort of life-limiting disability. The Factory has and continues to provide a safe and supportive environment and it’s heartening to know that the lives of so many veterans have been transformed by their employment here.”

One such veteran is poppy-maker and Factory tour guide Thomas “Tam” McPhillips. Seventy-three-year-old Tam served as a Lance Corporal in the Royal Signals, having joined up at the age of 18, and has worked at the Factory for almost 15 years.

It is clear how important the work is to Tam, as he explains: “Working at Lady Haig’s Poppy Factory means everything to me. It is such a deep thing and the camaraderie here is fantastic. New guys come in and they get that straight away. The hairs on the back of their necks prick up.

“It’s not just a job; it’s being part of a family. And beyond the job, the Factory has allowed so many veterans like me to rebuild lives after our time in the Armed Forces. It’s something to think about when you’re putting your pound in the tin and sticking your poppy on.”

Like so many of his colleagues, Tam’s life has been profoundly touched by conflicts from yesteryear. He adds: “My grandfather held my mother in his arms and handed her back to my grandmother before heading to war in the Somme. He never came back. I look at the old photographs of soldiers in the trenches and wonder: ‘Was my grandfather there?’ Every time I am making poppies, I think about my grandfather and the thousands of others that gave their lives for us.”

Gordon Michie, Head of Fundraising at Poppyscotland, said: “The National Uplift is a major milestone for us. It marks the culmination of a year of hard work by our veterans and means our biggest fundraiser is just around the corner. In this most poignant of years, we are sure the public will once again show their support in buying and wearing their poppy – whether traditional or the Centenary version.”

Mr Pelling also revealed that it wasn’t just poppies that the Factory used to produce, as he explains: “What a lot of people might not know is that the Poppy Factory didn’t always just produce poppies. Years ago, a number of other items were made here, too, including soft toys, wooden toys, lamps, plate drying racks, cork table mats, egg trays, footstools, napkin rings, fire screens, leather purses, and many more.”

The Scottish Poppy Appeal is Scotland’s largest annual street collection. Around five million poppies and 60,000 collecting tins are distributed around Scotland ahead of the event in October and November. Around 10,000 volunteers get on board to do their bit for the cause.

Money raised from the Poppy Appeal – and Poppyscotland’s year-round fundraising – enables the charity to deliver support to members of the Armed Forces community in Scotland by providing tailored funding and assistance. It is hoped that interest surrounding the Centenary Poppy will encourage the public to dig deeper this year, which will, in turn, provide a further boost for the life-changing support provided by Poppyscotland to the Armed Forces community in Scotland. 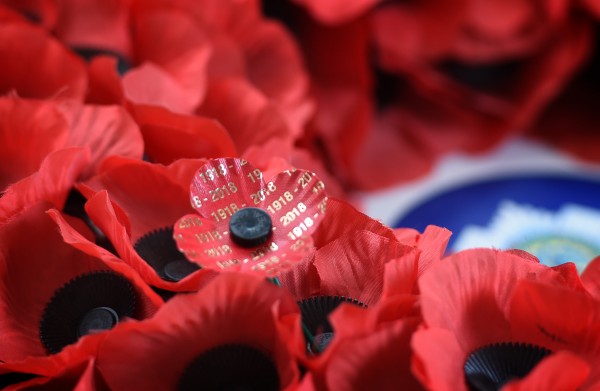