A blind veteran from Stowmarket in Suffolk was awarded runner-up in a national bowls competition for those with a visual impairment. 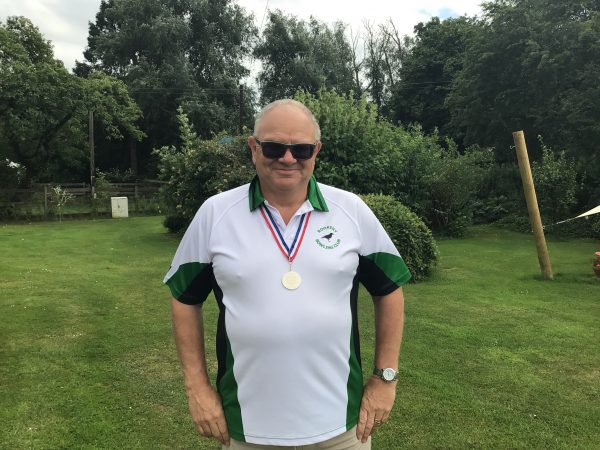 “It was very tight. We were only one game away from being champions, but I’m delighted with runner-up. I’m going to enter again next year and go for the gold.”

Vision-impaired bowls features a string which runs down the middle of the lawn so players can understand where the jack is. Competitors are given the distance of the jack in metres and often have a guide to provide advice.

“Before sight-loss I was always a competitive sportsman and played rugby to quite a high standard. So when I started to lose my sight I thought that aspect of my life was gone. But at my introductory week at Blind Veterans UK they got me into bowls and have supported me with it ever since.

“The support the charity has given me has been life-changing. On top of providing me with guides for bowls competitions they’ve trained me on an adapted computer so I can continue my work as a councillor and hypno-therapist. They’ve also supported my wife who’s my carer. I can’t thank them enough. I didn’t think there was life beyond sight loss but they’ve shown me how to live a full and fulfilling life.

“I would also like to thank Keith Pybus, Director at Rookery Bowls Club, as I would not have been able to do this without him. And also my fellow members at the club who have coached me and embraced my visual needs.”

Steve served with the Royal Military Police between 1976 and 1979. It was later in life that he lost his sight due to a brain tumour. Luckily Steve found out about Blind Veterans UK and the charity have been supporting him ever since.