You are here: Home / News / News / Support for former Sapper from SSAFA Lincolnshire

The way that SSAFA, the Armed Forces charity supports serving and former Forces personnel, and their families, is as unique as each case. 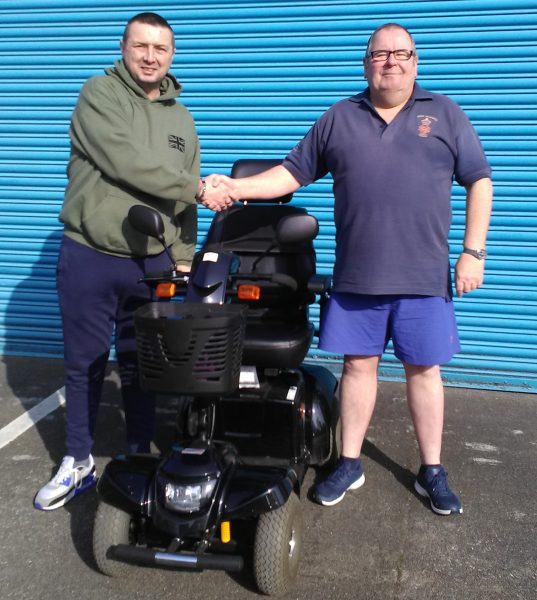 Take David Betts of Grimsby. David joined the Corps of Royal Engineers in 1996, proudly becoming a Sapper. The next 14 years saw him on tours of Iraq, Kosovo, and Afghanistan, experiences he describes as “… some of the most memorable times of my Army days”.

He left this life for Civvy Street in 2010 to work at a local business, Bacon Engineering, and to spend more time with his wife, Natalie, and children. However, he had to leave work to care for Natalie.

Fast forward to 2021, and David contracted Covid, which developed into long Covid. His health problems did not end there.

David takes up the story, saying:

“Then, in late summer 2021, my back went, and I was unable to move from the waist down. I had various tests carried out with the result being that the liquid in discs L3 and L4 had drained and created a ‘bulge’. It’s inoperable at the moment because of how close the area is to the main nerve in my spine.”

He and his wife decided to give up their car, but the level of his physical wellbeing began to drop. David started using a stick because of his back and knee trouble, and became increasingly reliant on strong painkillers. Natalie also noticed a sharp decline in his mental health, and together, they sought help for him from his GP and local mental health services.

“Natalie bought a wheelchair for me, and this was a godsend; we could go out again for more than the five minutes I could walk before the pain gets too bad.”

Forces’ people, serving or retired, have a reputation for being independent and proud, and perhaps David felt that his independence had been reduced by Natalie having to push him in a wheelchair.

“Look, I’m only 42, and all this has happened in the last six or seven months. I knew it couldn’t go on like this, but then I saw a post from SSAFA on Facebook from the Armed Forces and Veterans Breakfast Club offering a mobility scooter to someone in need.

“Maybe I didn’t want to accept that I was ‘someone in need’, but I bit the bullet, called the number and spoke to Mark Trainor of SSAFA.”

“At SSAFA, we help veterans’ and their families in all ways, including mobility scooters, but ordinarily we would need to conduct a new case for our client, get a doctor’s recommendation, arrange for an OT assessment and then request financial assistance. This all takes time.

“But sometimes, when a veteran or family member passes away, the family gift back the scooter to SSAFA, and we then offer it to a veteran in need, which is what we did for David.

“David and his family are going through a very difficult time, and I was delighted that SSAFA the Armed Forces Charity, could come to his assistance at such short notice with this mobility scooter. which will certainly enhance his quality of life.”

“This scooter is a lifeline. I can take my children to school, I can go out alone, and Natalie and I can now see a future, however long the road ahead

“Many of us servicemen and women like to hide our emotions and play down our needs, but at some point, we have to accept it and change, so for anyone who needs help or support from SSAFA, just get in touch, and don’t be ashamed or embarrassed.

“I’m not back to fighting fitness yet, but my quality of life is now going to improve tenfold, and we appreciate what SSAFA has done for us so much, because it’s priceless.”

SSAFA Lincolnshire is recruiting volunteers for various roles, especially caseworkers, so whatever your background – military or not – if you have time to spare to support veterans and serving personnel, then please visit ssafa.org.uk/Lincolnshire.