You are here: Home / News / News / Surrey blind veteran to take on 22-mile walk along D-Day beaches for military charity 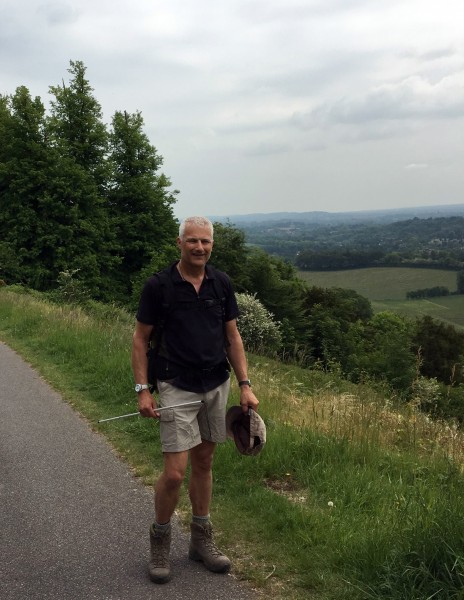 A blind veteran from Surrey is currently training to take part in a 22-mile walk along on the Normandy coastline to commemorate the anniversary of D-Day.

Chris Kennedy, 58 and from Guildford, will take part in the event alongside five other blind veterans supported by Blind Veterans UK, the national charity for vision-impaired ex-Service men and women. The challenge will take place on 6 June, the anniversary of the 1944 Allied invasion of occupied France.

Chris says: “As soon as I heard about the event I knew I wanted to take part. I think it’s going to be a unique experience, and I very much believe that sight loss shouldn’t stop me from taking on a challenge.”

On leaving school Chris joined the TA and the Queens Regiment. Following his initial training at Bassingbourn Barracks he served within the UK and applied to join the regulars. Unfortunately he was unsuccessful, but went on to serve as a Legionnaire with the French Foreign Legion for five and a half years.

Chris: “I was an Army cadet when I was in school and I’d always wanted to serve with the British Army. It was hard work balancing full time employment with service in the TA, but I learned skills that have lasted a lifetime.”

Following his time in the Forces, Chris joined Surrey Fire and Rescue Service, where he worked for ten years. It was during this time that he was diagnosed with Stargardt syndrome, a hereditary condition that would eventually rob him of his sight.

Chris says: “The diagnosis came as a shock. While I knew my vision would deteriorate, I avoided telling those around me until I absolutely had to. I didn’t want to identify as someone with a vision impairment.”

Eventually Chris’s worsening vision caused him to leave the Fire Service and he went on to work in various roles, including for Surrey Police.

Despite losing his sight in his mid-thirties, it was only last year that Chris found out about Blind Veterans UK. He happened to meet a fellow blind veteran at a local sight loss support group who recommended he contact the charity.

Chris says: “I felt like I was on my own for a very long time, so I found the amount of support I received from Blind Veterans UK overwhelming. The charity has opened up so many new possibilities to me that I wasn’t aware of and really looked at my specific needs and how I can be best supported.”

Chris attended an introduction week at Blind Veterans UK’s Llandudno centre where he had the chance to meet other ex-Service men and women living with sight loss. He has since received advice on employment, as well as IT training.

Chris says: “I decided to sign myself up for the D-Day 44 Challenge because I have always found being fit and active to be very important for my overall wellbeing. This challenge, which I’ll be taking part in with other blind veterans, is a chance for me to push myself physically and to raise awareness of Blind Veterans UK, which has already done so much for me.”

To support Chris as he takes part in the D-Day 44 Challenge, head to justgiving.com/campaigns/charity/blindveterans/d-day