The small village of South Holmwood, near Dorking has been welcoming London cab drivers and veterans every summer since 1948. One couple is determined that the tradition will continue. 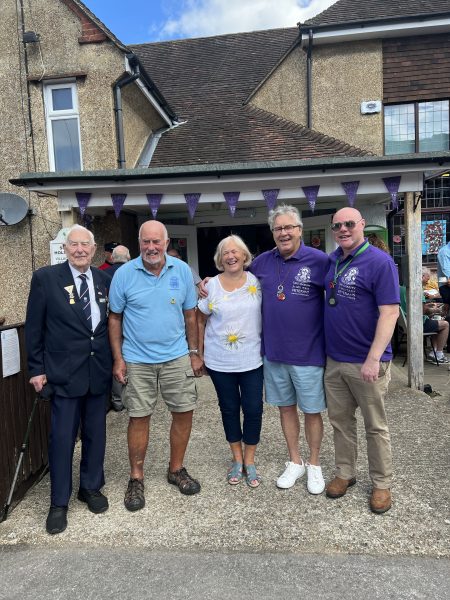 Resident Ian Fairbrother 79 has lived in South Holmwood all his life. His wife Sue 74 is a relative newcomer having only moved to the village when the couple married 56 years ago.  Since 1948 Ian has never  missed the Taxi Charity visit on their way to Worthing for their annual trip to take veterans to the seaside.

“As a very small child our village had virtually no cars so when the Taxi Charity first brought veterans to the village in 1948 in black cabs, we were amazed to see so many vehicles.

“Once a year The Taxi Charity drove from London down the A24 to Worthing and would stop off in South Holmwood on the way for refreshments and a toilet stop.

“In the early days many of the veterans were from WWI and were sometimes so badly injured that they couldn’t get out of the cabs to join us in the village hall, so the children collected flowers, made posies  and waited with so much excitement until the first iconic black cab was seen on the return journey from Worthing to London. Every year, after school,  all the village children were allowed to sit in the cabs and chat with the veterans or listen to the entertainment with the veterans in the Hall.

“Everyone in the village participated making sandwiches and cakes to make sure the tables were always groaning under the weight. Our village hall was much bigger in those days and had a stage, so the villagers always ensured that the veterans had some entertainment as well as copious cups of tea or glasses of beer if they preferred.

“For many the date of the Taxi Charity visit is the village highlight. As the years pass the Taxi Charity visit is still a major highlight and Sue and I now have the great pleasure of organising the charity visit. This year we had so many offers to bake cakes; sausage rolls and make sandwiches that we were overwhelmed. This year there were sixty cabs on 5 July but in the past, we have welcomed over 100 cabs. This year my daughter joined us and the other village volunteers to make sure that the veterans and volunteer London cab drivers were looked after, and we were delighted to go on to Worthing in a black cab for the event on the pier, as guests of the charity.”

“The people of South Holmwood are very special indeed. About 180 of us descended on the village between 9.00am and 11.00am and they treated us to a marvellous buffet and drinks and would not allow us to pay anything towards the costs. The faces of the volunteer cab drivers and the veterans we bring with us may have changed over the last 74 years  but the amazing welcome and hospitality we receive from the village never does.”

To find out more about the support the Taxi Charity offers veterans or to donate  visit www.taxicharity.org