Nine colleagues from TalkTalk – and three dogs – trekked to the top of Mount Snowdon to raise more than £1,500 for Broughton House, the Salford care home for former servicemen and women.

The group all work in the service management division of TalkTalk Technology and are based at Salford Quays.

For a year the team has supported Broughton House as part of the telecoms provider’s Give Something Back programme, which encourages staff to volunteer or raise funds for local charities.

The intrepid group of five men and four women followed the Llanberis Path to the top of Snowdon, which at 3,560ft is the highest mountain in Wales.

Their route took them alongside the Snowdon Mountain Railway as they set off at 8am in misty and rainy conditions, reaching the peak by lunchtime.

They arrived back in Llanberis for 3.30pm, thrilled at their achievement of conquering Snowdon for a great cause.

“It was a hard slog along steep stony paths to reach the summit but we were all determined to get there.

“Life felt good once we reached the top. We could see for miles and were able to unfurl the Broughton House banner.

“As a charity providing care for veterans, Broughton House is a cause close to the hearts of several members of our team, who have either served in the armed forces themselves or have family members who have or are serving.

“Being located in Salford not far from our offices, it really stands out as a charity that we are eager to support.” 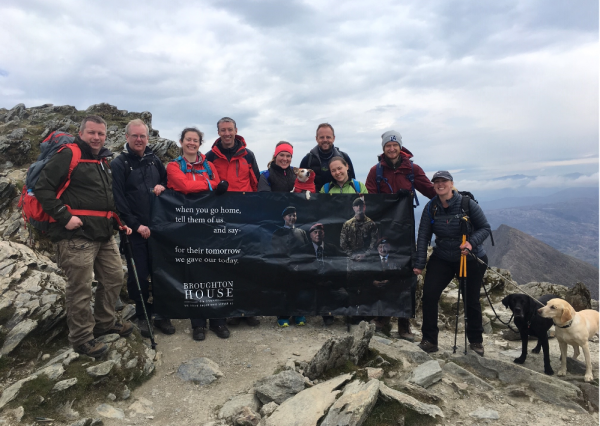 Donations via www.justgiving.com/fundraising/ttsnowdon have so far exceeded the group’s target of £1,000, reaching £1,544 including Gift Aid.

“We’re extremely grateful to the team for taking on the Snowdon challenge.

“TalkTalk has supported us in a number of ways over the past year, from spending time with residents and cleaning our military museum to providing hampers for our veterans to enjoy at Christmas. We really do appreciate their support.”

Broughton House is currently undergoing a £14m redevelopment which will see the north west’s first Veterans Care Village created on the site.

The dogs are Misty, a Parson Russell Terrier, who belongs to Gill, and labradors Scarlett and Hugo, which are golden and black respectively and are owned by Esther.