You are here: Home / News / News / Taxi Charity for Military Veterans Presented with the Queens Award for Voluntary Service

On behalf of Her Majesty The Queen, The Lord-Lieutenant of Greater London, Sir Kenneth Olisa OBE officially presented  the Queen’s Award for Voluntary Service to fifteen voluntary groups including the Taxi Charity for Military Veterans, at Westminster Abbey 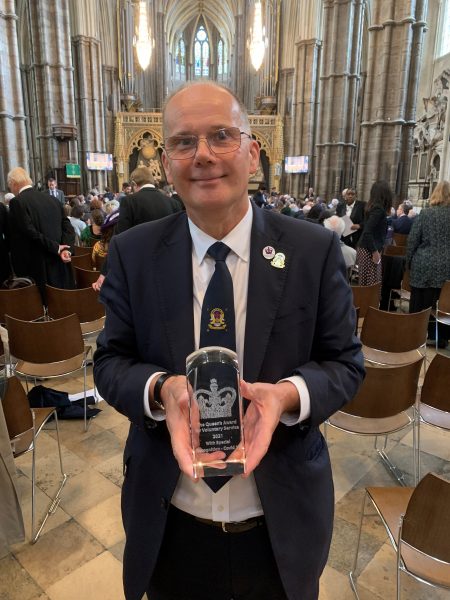 The Taxi Charity had been notified on the 2 June, that it had been awarded the QAVS,  the highest prize given to local volunteer groups and widely regarded as the equivalent of an MBE for volunteers.

Today the charity was delighted to receive the QAVS crystal from the Lord-Lieutenant of Greater London, Sir Kenneth Olisa OBE on behalf of Her Majesty The Queen.

“This morning’s Queen’s Award for Voluntary Service presentation at Westminster Abbey was a very proud moment for our charity and trade.  As a London cabbie, I was deeply honoured to receive the Award on behalf of the Taxi Charity for Military Veterans. I am fully aware it is thanks to the efforts of all those who have supported our wonderful charity since its modest beginnings in 1948 which made this possible, and I would like to take the opportunity today to pay tribute to all concerned.”