You are here: Home / News / News / Taxi Charity Supporting Veterans Through This Pandemic

The Taxi Charity for Military Veterans has been supporting veterans since 1948 and during the COVID-19 pandemic has called on London’s black cabbies and charity supporters to go the extra mile to ensure that veterans have someone to chat with or to do their shopping. 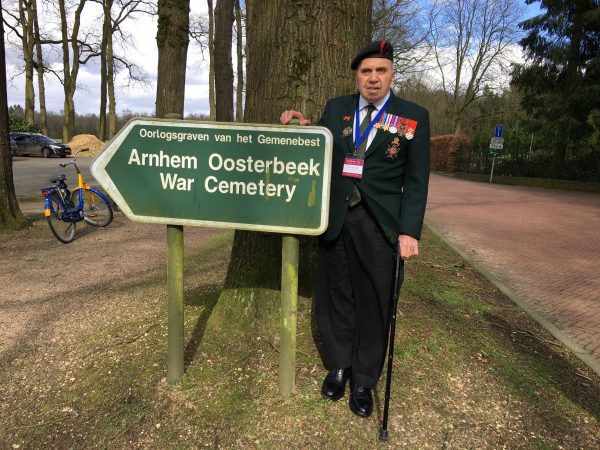 Last week, the Chairman of the Taxi Charity, Ian Parsons, did some shopping for WWII veteran Harry Rawlins, who lives in Edgware. Harry, an Arnhem veteran, was in the 8th Armoured Brigade, 30 Corps and was part of Operation Market Garden in September 1944. Every year Harry joins the trips organised by the Taxi Charity to the Netherlands for the Arnhem commemoration services. 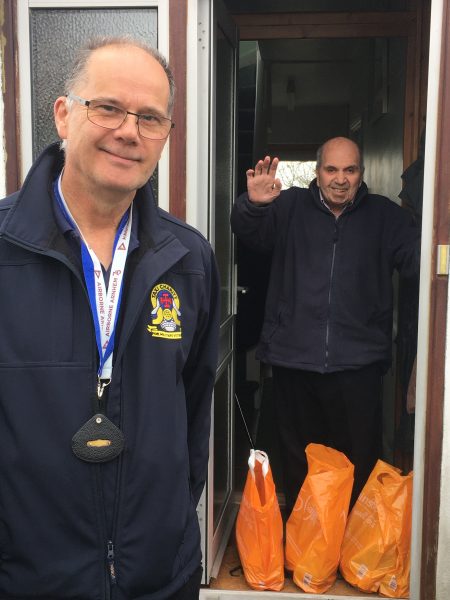 “We know that many of our veterans have a support network of friends and family but at this unprecedented time the charity needs to do all it can to ensure that none of the veterans are without someone to do their shopping or someone to speak to when they need to talk.”

Ian called at the local supermarket and delivered bags of shopping to Harry’s door and had a chat, while always maintaining the required two metres distance.

“The Taxi Charity are truly a lifeline. For many years I have joined the charity on trips to the continent to pay my respects to the comrades who didn’t come home, on day trips throughout the South East and at parties and social gatherings. The care they show to us veterans is amazing and they have really enriched my life by giving me the opportunity to meet regularly with other veterans. Being socially isolated is very difficult but the regular contact I receive from Ian and Anne, his wife and knowing that there are always people that I can call on for help is a very reassuring position to be in.”

The Taxi Charity has had to put all its fundraising activities on hold due to the Coronavirus restrictions so if you could help the charity please do consider donating at www.taxicharity.org

Harry Rawlins as the Croix de Guerre 1940 with Palm – the certificate reads:

As a Rifleman, and then as a Section Comdr., this man took part in a number of patrols during the liberation of France and Belgium, two of which owed their success to his personal courage and leadership.

As a Bren Gunner on one occasion, he acted entirely on his own initiative by engaging enemy who had pinned a Section down exposing himself to considerable danger, he neutralised the enemy fire, released his section and paved the way to a successful attack.

He was presented with the Legion D’Honneur, France’s highest military honour, in 2015.

A recollection from Harry Rawlins

We, that is C company started off from Nijmegen in Holland towards Kleve in Germany on 7th February 1945. We were supposed to be on a peace move [that is moving within our own lines], but the troops that preceded us had met stronger opposition than expected and had been unable to clear the way. We weren’t expecting to start fighting until we reached the other side of Kleve. Then we were to advance down between the river Rhine on our left and the Siegfried Line on our right. Clearing it as we went. Thinking we were within our own lines we were relaxed, and we only put out a Bren Gun when we stopped for Anti-Aircraft Defence. We stopped on the outskirts of Kleve and got out of our Halftracks to stretch our legs. Not knowing we had driven straight into the enemy’s front line and they had woken up to it before we did. They opened fire on us and we took up positions to return fire. They Mortared us. It was then that we had some casualties.

There were others wounded, but not in our section

I did not see Tom or Ted, but Jack was about twelve metres away. I called to him “Are you alright Jack”. But I could not make out what he was saying. I crawled to his side. He was wearing a leather jerkin. There was something wrong, but I did not know what. While there another Corporal came. He said “Grab hold of his shoulder”. He grabbed the other one and we ran half draggIng, half carrying Jack across about 20 metres of open ground until we could leave him to be picked up by the stretcher bearer.

I went back, collected the Bren Gun and returned to my position.

While there my Platoon Commander, Lieutenant Michael Howe Hewlett came and whilst talking to me was shot dead by a sniper.

It was a bad day for us.