You are here: Home / News / News / Team Hong Kong Fury take on Race to the Tower for SSAFA

Two intrepid soldiers from the Royal Signals are to embark on the epic Race to the Tower challenge, a gruelling double marathon finishing at the 65ft Broadway Tower near Evesham. The event takes place on 24 and 25 June 2022, the 25th being Armed Forces Day. 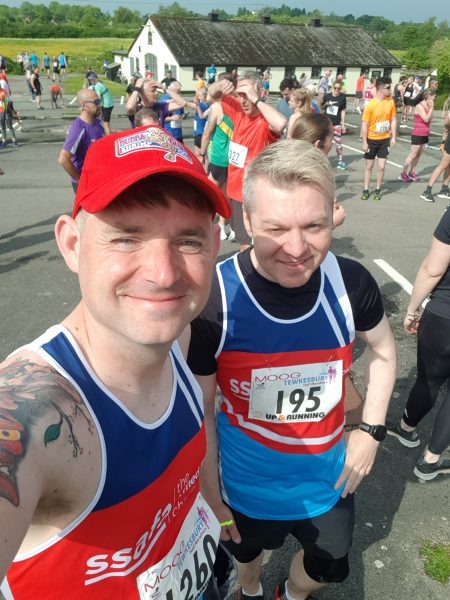 The team from 252 (Hong Kong) Signal Squadron, 22 Signal Regiment, will run the 52.4 miles over 2 days to raise money for SSAFA, the Armed Forces charity, and to raise awareness of mental health issues in the military.

Sergeant Antony Plummer and Lance Corporal Phil Broomhall both began fundraising in January 2022 to raise awareness and promote SSAFA’s scope of work. Sgt Plummer, himself a mental health first aider, is no stranger to running challenges. He has completed the RLBI Tommy 10k in for 10 days, took part in a collaborative virtual CONQUER BRITAIN challenge in support of the Veterans Charity, and now in support of SSAFA, the Armed Forces Charity, looks set to conquer the Broadway Tower alongside LCpl Broomhall.

“I have served 15 years in the British Army and up until recently, I didn’t truly understand what SSAFA offered or how they could help. In December 2021, 252 Sig Sqn welcomed Roger Wilson and Deborah Maguire from the SSAFA Gloucester Branch to come in and deliver a much-needed awareness brief. I was stunned to hear what both Roger and Deb delivered. Due to this, Team Hong Kong Fury is running to raise money for SSAFA to keep raising awareness for them and helping the serving community”.

“Never one to sit back, and always looking for the next challenge. Committing to Race to the Tower was an easy decision when considering the cause. An excellent platform to raise awareness of SSAFA, the Armed Forces charity, I can honestly say that not only am I running half marathons regularly, im doing it with passion. I’m helping lead the way in encouraging our serving personnel to assist the charities that are there for us when we need them the most”.