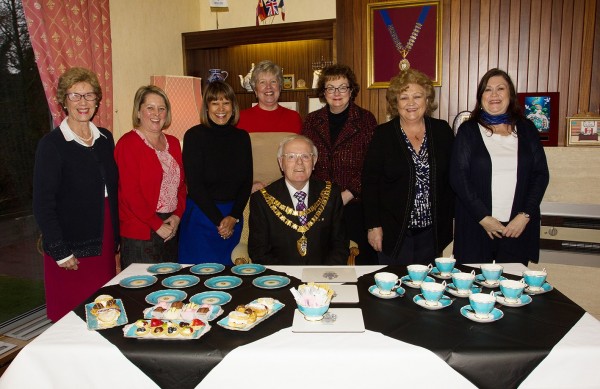 Volunteers from the Solihull based charity Troop Aid were thrilled to be invited to take tea with the Mayor of Solihull Councillor Stuart Davis at the Solihull Civic Suite on 14 February.

They were also given a unique opportunity to see around the Council Chamber.

Mr Mayor commented about the charity’s work:
‘Here in Solihull we are so proud to be the home of Troop Aid. It’s the charity that supports our injured service personnel by giving them the basic essentials when they are inevitably a long way from home and they have nothing because timely medical attention has been the main priority.

‘The majority of the work done by Troop Aid is done by volunteers and I was so pleased to be able to meet some of them today to say how much we all appreciate their hard work.’

Since it started 12 years ago the charity has supplied over 14,000 of their Grab Bags all over the world. Most recent deliveries have been to Afghanistan, Cyprus, Somalia and South Sudan.

Troop Aid’s next fund raising event will be on the evening of Saturday 10 March 2018 at Shirley Methodist Church when the Firebird Singers will present ‘A Spoonful of Songs’, a celebration of the magical music of Disney. Tickets at £8 each including refreshments can be obtained by ‘phoning the Troop Aid office between 9am and 3pm daily on 0121 711 7215.

When service personnel are injured either on training exercise or in combat they return to the United Kingdom without their personal effects or clothing.

Troop Aid supplies them with the ‘basic essentials’ in a Grab Bag.

In addition to this emergency pack Troop Aid also supplies on demand to the injured service personnel many other items of clothing and footwear such as tracksuits, hoodies, fleeces and trainers.

A registered charity, Troop Aid’s patron is HRH The Prince of Wales.

Troop Aid is funded by donations and receives no government support. Anyone interested in finding out more about Troop Aid and to learn how they might offer support should telephone 0121 711 7215 or go to the website at www.troopaid.info. Donations can be sent to: Troop Aid, 21 Radway Road, Shirley, Solihull  West Midlands, B90 4NR.

Troop Aid – a small charity with a worldwide reach.

By @Cobseo 52 minutes ago