You are here: Home / News / News / The Atlantic Nomads cross the Atlantic as world record holders on behalf of Alabaré Homes for Veterans

It was with great excitement that following 40 days and 37 minutes at sea, supporters of the Alabaré charity welcomed the Atlantic Nomads to Antigua on Friday. The team crossed the finish line in the Talisker Whisky Challenge at 08:17 local time having chosen Alabaré’s Homes for Veterans as their charity beneficiary for the Talisker Whisky Atlantic Challenge which commenced in December. The team also managed to land a world record as the fastest mixed trio. 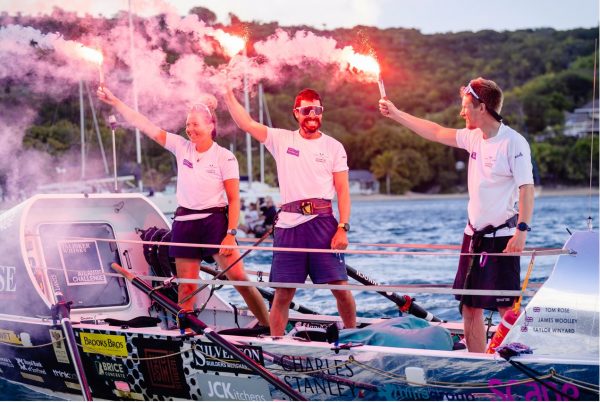 The challenge which brings together people from all walks of life covers over 3000 miles of ocean and is the ultimate feat of human endurance. This year, a record breaking 36 teams took on the challenge, crossing the Atlantic in rowing boats in teams of one to five. Departing La Gomera in the Canary Islands on 12th December the teams have and continue to row in constant shift patterns until they reach their destination in Antigua & Barbuda. The first boat came in at 34 days, but it has been known to take up to 87!

As with all feats of endurance the Atlantic Nomads have had to battle numerous obstacles. An incredibly hot start to the event meant they had to travel much further south this year to pick up the right weather patterns, keeping to a perfect position, steering at night was one of the biggest challenges, as they had to hand steer.

But they slogged their way across this brutal ocean, working hard for every nautical mile, rowing solo through the nights and balancing various shift patterns; anything from 2 hours on, 2 hours off, to 1 hour on and 30 minutes off at times.

The team of three (2 men/1 woman) James Woolley, Tom Rose and Taylor Winyard trained for over a year. Although no strangers to undertaking adventure challenges, this has been the ultimate test for them as they’ve battled sleep deprivation, salt sores, physical extremes, sickness, as well as being left on their own to tackle the continuous challenges that the ocean and the isolation have thrown at them.

Unlike other crews, they had not set out to break any records, which they have described as “the icing on the cake”. Taylor was also the first woman to cross the finish line this year.  Taylor describes crossing the finish line as hugely emotional as they saw their family and friends waiting to greet them, saying,

“We could see the British flags and I could hear the sound of bagpipes,” she said. “It was so special.”

As well as witnessing incredible sunsets and having pods of dolphins for company the team will certainly be recounting some incredible stories. Their boat, Doris, a 28ft craft with a small cabin at either end is about the length of 3 saloon cars, offers no home comforts and not even a loo!

The team faced stiff competition throughout the race but managed to maintain a position of 10th in all boats. Winyard said sleep deprivation was the hardest part telling The Scotsman,

“There were highs and lows every day, but the crossing generally went very smoothly, although we did have issues with our GPS and autohelm in big seas.”