One of the largest fraternal organisations in the United Kingdom, The Royal Antediluvian Order of Buffaloes (RAOB), has raised £500 for bereaved Armed Forces children’s charity Scotty’s Little Soldiers through donations and word of mouth this month. 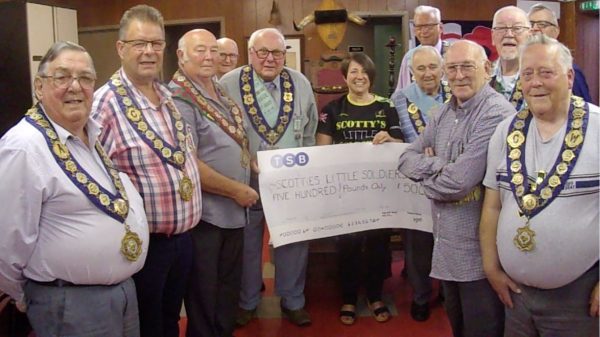 RAOB support a number of charities and, after researching Scotty’s Little Soldiers, decided it was a good fit for the organisation. RAOB began to raise money for the cause earlier this year and this week presented a cheque for £500 to the charity.

“We’re always looking for worthwhile causes to support and Scotty’s Little Soldiers is truly one of these. After spending time researching the charity and learning about its programmes we were all very keen to contribute to this.

“Following the initial money which we’ve raised, we have also requested collection buckets from the charity and we hope that we can continue to contribute to such a wonderful cause.”

“We’re very grateful for this donation and it will go a long way for us. It’s important for us to receive vital funds on a regular basis in order to continue to support our members. On behalf of all of Scotty’s Little Soldiers I want to say a big thank you to local members of The Royal Antediluvian Order of Buffaloes.”

To see how you could support Scotty’s Little Soldiers visit: http://scottyslittlesoldiers.co.uk/