You are here: Home / News / News / The Royal British Legion calls on the nation to mark 75th anniversary of VE Day from home

The Royal British Legion has today announced a programme of activity to mark the 75th anniversary of VE Day on Friday 8 May for people to participate in from home. 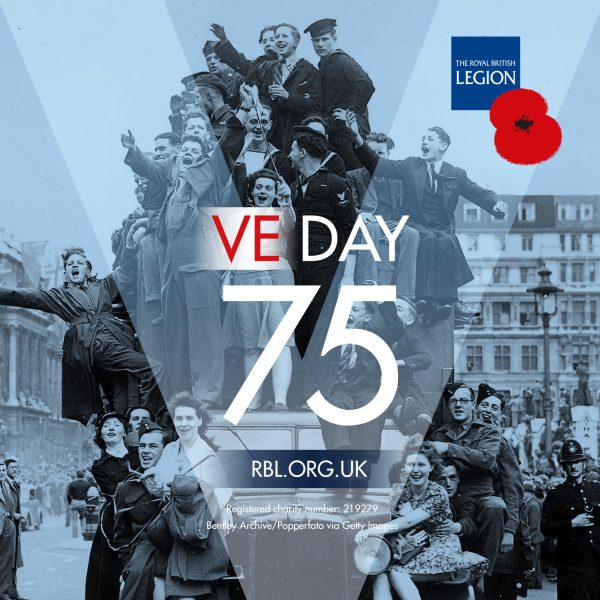 With members of the public no longer able to attend VE Day 75 events, the Legion is calling on the nation to get involved from home throughout the day and pay tribute to the entire Second World War generation from British, Commonwealth and Allied Forces, to evacuees and those who served on the home front.

Activities include a VE Day 75 livestream, national moments of Remembrance and thanksgiving, and activity packs for individuals and families.

At 11am the Legion is encouraging people across all generations and communities to take part in a national moment of Remembrance and pause for a Two Minute Silence to honour the service and sacrifice of the Second World War generation, and also take the opportunity to reflect on the devastating impact Covid-19 has had on so many lives across the world.

Following the Silence the Legion is hosting a VE Day 75 livestream, sharing stories and memories from those who served and sacrificed during the Second World War, and recognising the difficulties people are experiencing today. Hosted by TV presenter Sonali Shah, the programme will feature contributions from social historian Julie Summers and cook and influencer Melissa Helmsley. The programme will be live from 1115 on the Legion’s website.

Later in the day the Legion has partnered with the BBC to honour and celebrate the Second World War generation with an evening of memories and music from 8pm on BBC One. Members of the public are invited to enjoy a moment of celebration and thanksgiving during the programme by taking part in a UK-wide rendition of Vera Lynn’s ‘We’ll Meet Again’ at 9pm.

Alongside these events on 8 May, The Royal British Legion has developed a VE Day learning pack which is available online. Designed for 7-14 year olds the pack includes first-hand accounts from the Second World War generation, veteran interviews and range of activities to allow families to explore and commemorate VE Day together.

“As we face some of the most challenging times since the Second World War, now more than ever it is important to unite in recognition of people’s service to the nation, just as communities did 75 years ago.

“There is no right or wrong way to take part in the Silence at 11am, some people may wish to stand at their windows or step outside their front door, but we hope that individuals and families across the UK will embrace the opportunity to share in a national moment of reflection. Then later on we

invite people to open their windows wide and join us to celebrate and give thanks as we singalong to Dame Vera Lynn’s wartime classic, ‘We’ll Meet Again’, which has added poignancy in the current circumstances.

“There are many parallels between the struggles of the Second World War and what we are going through today. As we mark 75 years since Victory in Europe, we look to our Second World War generation to learn from their experiences, and the Legion continues our critical work to protect them from the threat we currently face.”

Members of the public can access the activities at www.rbl.org.uk/veday75 and on social media using #VEDay75 and #VEDay75Live during the livestream.

Interviews are available with Legion spokespeople on request.

Bob is the son of a career soldier. He joined the Army as a Trooper in the Royal Tank Regiment in 1976 after extensive travels in the Far East and then served for 34 years in a variety of roles rising to the rank of Lieutenant Colonel. His Service culminated with an Operational Unit command with MND(SE) in Iraq. In November 2010 he was presented with an OBE by HM The Queen at Buckingham Palace. Within the Legion, his primary responsibility is as organisational lead for Commemorative Events and in developing a closer working relationship with the Veteran communities.

Catherine Davies, Head of Remembrance for The Royal British Legion

Catherine studied History and Politics at the University of Huddersfield before joining the BBC. Within the Legion Catherine leads the Remembrance Team and is responsible for creating and implementing the organisation’s strategy for Remembrance.

Interviews and / or quotes are available from individuals from the Second World War Generation on request.

generation and reflect on the devastating impact Covid-19 has had on so many lives across the world.

There is no right or wrong way to take part in the Silence, some may wish to stand at their windows, step outside their homes while remaining distanced from others, watch the broadcast on television, or simply sit in a quiet moment of reflection.

Royal British Legion Livestream At 1115 the Legion is hosting a VE Day 75 livestream, available at page rbl.org.uk/veday75 sharing stories and memories from those who served and sacrificed during the Second World War, and recognising the difficulties people are experiencing today.

The Legion is inviting members of the public to grab a cup of tea and join us for the livestream as we bring the World War Two generation together with today’s generation to chat about their shared experiences. Hosted by TV presenter Sonali Shah, the programme will feature contributions from social historian Julie Summers and cook and influencer Melissa Helmsley. The livestream will be available on the Legion’s website.

To mark the 75th anniversary of VE day, in these unprecedented times, the BBC in partnership with the Royal British Legion will honour and celebrate the World War Two Generation with an evening of memories and music. Featuring some of those who remember this historic day, together with Britain’s favourite performers, Katherine Jenkins, Adrian Lester, Anton Du Beke, Beverley Knight, Helen George, Sharon D Clarke, Shane Richie and Emma Barton who will entertain us with popular songs of the era. In a fitting finale at 9.00 pm we will see the nation unite for a very special rendition of “We’ll Meet Again” as across the UK we all give thanks to our veterans and remember our loved ones.

The Royal British Legion is the nation’s biggest Armed Forces charity providing care and support to all members of the British Armed Forces past and present and their families. The Legion champions Remembrance and safeguards the Military Covenant between the nation and its Armed Forces. It is well known for the annual Poppy Appeal, and its emblem the red poppy. www.britishlegion.org.uk