Representatives from The Taxi Charity for Military Veterans joined family and friends on Friday 17 July 2020 to pay their respects at the funeral of 100-year-old WWII veteran George Parsons. 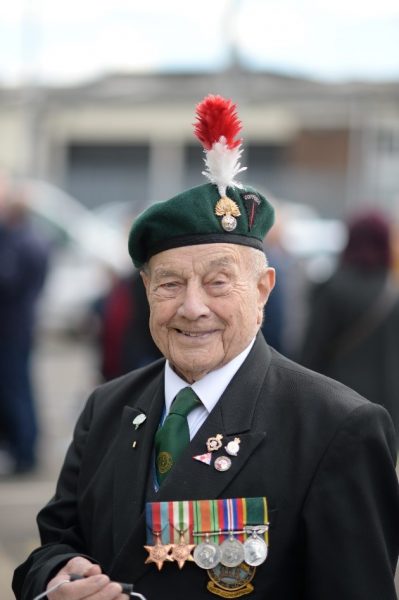 In 1940 George was sent to Norway with the City of London Royal Fusiliers to prevent the Germans reaching the Norwegian iron ore supplies. This was a very difficult deployment with heavy fighting and troops who were unprepared for the mountainous terrain. George was eventually able to get out of Norway on the last cruiser.

On return home their unit was visited by Winston Churchill who informed them they were to become the base of a new unit called the Commandos and would start training in Scotland.

George later served in Italy and Greece with No 2 Commando.

George was married to Sylvia for 76 years and after her passing he spent his final years at the Royal Hospital Chelsea. Sylvia and George had five children and eleven grandchildren and one great granddaughter

After the war George took Holy Orders and his first parish was in South east London and included Millwall FC. He was a vicar for fifty years but had plenty of time for other hobbies including volunteering at the Wimbledon Theatre for many years, being a football referee and using his creative talents to do tapestry, art, macramé and enrolling on cookery courses.

“Rev. George Parsons was the true definition of a Gentleman and will be sorely missed by everyone at the Taxi Charity. Last year we helped to celebrate his 100th birthday at a party in central London with a group of veterans and he told me how delighted he was to have shared this significant event with so many good friends. God bless you Sir and thank you for your service.”

To find out more about George Parsons memories of WWII visit; www.chelsea-pensioners.co.uk/centurion-george-parsons-remembers-wwii